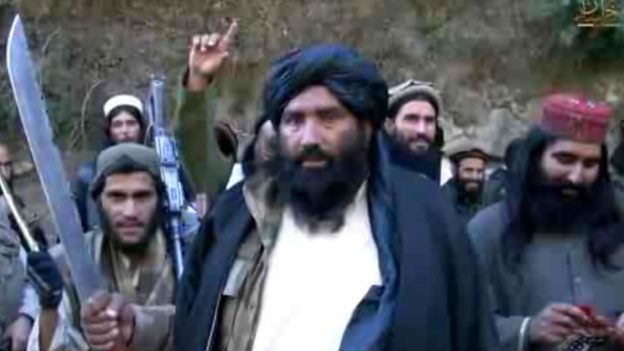 A drone strike in Afghanistan has killed a militant commander who recently swore allegiance to Islamic State (IS), officials say. The police chief of Helmand said that former Taliban commander Mullah Abdul Rauf had died in the strike. It emerged last month that Rauf had sworn allegiance to IS after falling out with the Taliban. Tribal elders in northern Helmand say a car carrying up to six people was destroyed while crossing the desert. The car was loaded with ammunition and exploded, reports said. The Afghan Intelligence Agency also said Rauf had been killed. However, his death has not yet been confirmed by Nato sources. Recruiting in Helmand The militant commander's brother-in-law and four Pakistanis were also killed in the attack, Helmand police chief Nabi Jan Mullahkhel was quoted by Reuters as saying. Rauf, who spent six years in Guantanamo Bay after being captured by US forces in 2001, was reported to have fallen out with the leader of the Taliban, Mullah Omar. He swapped the white flags of the Taliban for the black flags of IS and recruited followers in Helmand. Rauf was then named as deputy leader of IS in "Khorasan" - an old name for Afghanistan - by the organisation in Syria. The most senior IS commander for the region is Saeed Khan, who is based in Orakzai tribal agency in Pakistan. Islamic State controls swathes of Syria and Iraq and has a small but growing presence in parts of Afghanistan. Correspondents say it poses the first serious challenge to the coherence of the Taliban leadership for many years. BBC