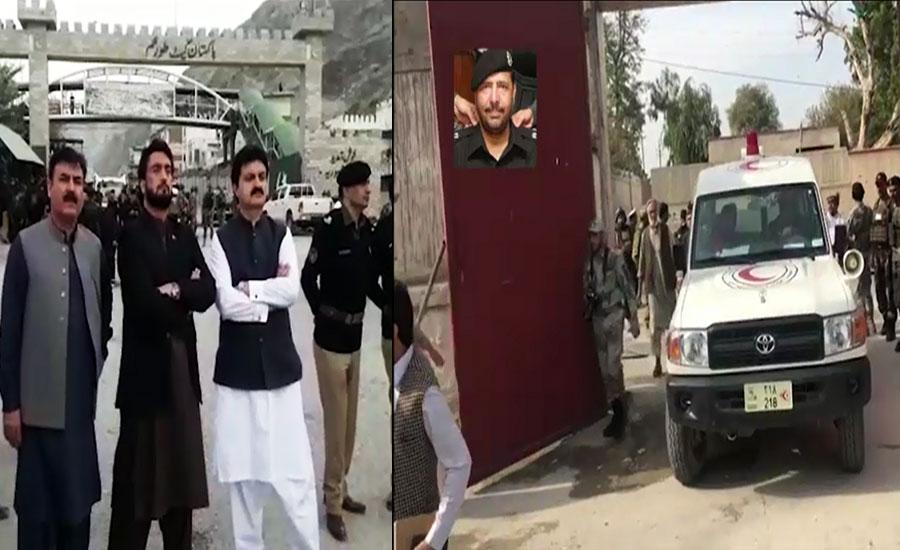 PESHAWAR (92 News) – Funeral prayers for martyred Superintendent Police (SP) Tahir Dawar, – who killed in Afghanistan after he went missing from Islamabad – were offered at Police Lines in Peshawar on Thursday. The funeral prayers were attended by KP Governor Shah Farman, Chief Minister Mehmood Khan, Corps Commander Lt Gen Shaheen Mazhar, State Minister for Interior Shehryar Afridi and Chief Secretary Naveed Kamran Baloch. IG KP Salahuddin Mehsud, Shehram Tarakai and KP government spokesman Ajmal Wazir, relatives of the martyred police officer and a large number of senior civilian, military and police officials in presence. Martyred SP Dawar will be laid to rest in the Hayatabad area of the city. Earlier today, the dead body of the martyred SP Tahir Khan Dawar was handed over to a Pakistani delegation on Pakistan-Afghan Border at Tourkham on Thursday evening. Minister of State for Interior Shahryar Khan Afridi and Khyber Pakhtunkhwa Minister for Information Shaukat Yousafzai were present at Torkham to receive the dead body of Tahir Dawar. Mohsin Dawar and other people were also present on the occasion. Missing SP’s dead body is being brought to Peshawar by helicopter. The funeral prayers of Tahir Dawar will be offered at Police Lines in Peshawar. Earlier before, the Afghanistan authorities refused to hand over body of missing Superintendent of Police Tahir Dawar to Pakistani authorities. The Afghani authorities want to give the body only to the MNA Mohsin Dawar. On the other hand, Islamabad summoned again the Afghan envoy and recorded their protest for the delay on receiving the body of Tahir Dawar. A day earlier, Afghanistan Foreign Ministry confirmed that missing SP Tahir Dawar was killed in Nangarhar province and the report related to the dead body of Tahir Dawar was correct. It also said that the dead body would be handed over to Pakistani Consulate at Jalalabad today. It was reported that the body of police official will be transferred to Peshawar through Torkham border. The body of SP Tahir, who went missing from Islamabad on October 27, was found at province Nangarhar in Afghanistan. Dr Faisal Faisal said that the missing cop was first seen by people of Afghanistan’s district Dur Baba. “Afghanistan Foreign Ministry informed Pakistan’s embassy about the recovery of the dead body of Tahir Dawar. The dead body also contain service card of late SP Dawar”, the spokesperson added. Faisal further said that dead body of deceased would be handed over to Pakistan’s diplomatic mission in Jalalabad, then, the body will be shifted to Pakistan through Torkham border after completion of the legal procedure. Earlier, the dead body of missing Superintendent Police (SP) Tahir Khan Dawar allegedly found in Afghanistan. According to the pictures released on social media, Tahir Khan Dawar was murdered in Afghanistan. The social media pictures revealed the allegedly murder’s story of the missing superintendent police. Meanwhile, the speculation over the fate of the missing officer mounted on Tuesday when pictures of a dead body found in Afghanistan’s Nangarhar province, purportedly that of Dawar, started circulating on social media platforms. On October 27, SP Dawar had gone missing from Islamabad. Following to this no report surfaced till now, however, different reports related to the incident came on the front line.