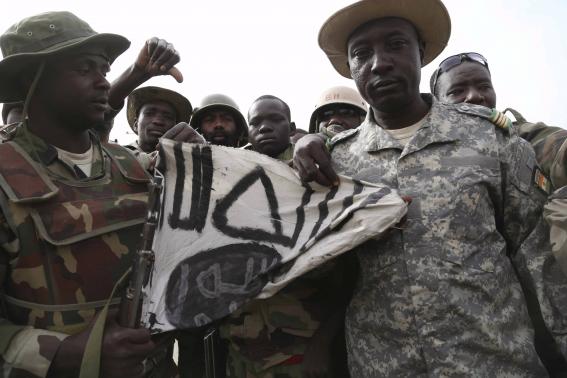 DAMASAK - "Boko Haram is finished" shouted a jubilant soldier from Niger as his comrades danced and waved their rifles in the air to celebrate the liberation of the northern Nigerian town of Damasak. Graffiti painted on walls in Arabic and Boko Haram's black and white flag fluttering on the dome of a mosque are now among the few reminders of the Islamists' four-month reign over the town, which forces from Chad and Niger freed on Saturday. The town's recapture was the latest victory in a regional offensive that has turned the tide against the six-year old jihadi insurgency. If troop morale is a guide to military success, then the regional force fighting Boko Haram looks set to press home its battlefield gains. Hundreds of heavily armed soldiers from Chad and Niger paraded triumphantly in Toyota pick-ups through the dusty streets of Damasak on Wednesday, cheering and waving their weapons after the town's former occupiers fled into the surrounding countryside. "Troop morale is sky-high," said Niger force leader Colonel Toumba Mohamed. "We faced an enemy who had truly occupied this area and it wasn't easy to push them out, but we did and now they are reduced to almost nothing." It was a stark contrast to late last year when Nigerian forces scattered as the rebels, who are fighting to carve out an Islamist state in northern Nigeria, seized a swathe of towns in Borno state including Damasak and bore down on the regional capital Maiduguri. By the start of this year, Boko Haram controlled around 20 local government areas, a territory the size of Belgium. In a dramatic reversal, Nigeria's army said on Tuesday it pushed the rebels out of all but three districts. The regional offensive launched this year by Chad, Niger, Cameroon and Nigeria comes as Africa's most populous country and biggest economy prepares to hold elections on March 28. The vote was delayed by six weeks after security chiefs said they could not guarantee security owing to operations to combat Boko Haram. President Goodluck Jonathan has been criticized for not doing enough to tackle the insurgency. His challenger Muhammadu Buhari has campaigned on a reputation for toughness gained when he was military ruler of Nigeria in the 1980s. In Damasak, abandoned vehicles and motorbikes lay by the side of the street, with shops and garages standing empty. The town was partially looted before it was recaptured but witnesses said it bore few battle scars. Commanders said most of the fighting took place outside the town. Chadian soldiers displayed scores of weapons, many of them battered AK47 assault rifles, captured from the Islamists. "The resistance was fierce. The enemy even had armored personnel carriers," Mohamed said, estimating that 300 insurgents were killed. "It's good to grind down the enemy." NEVER AGAIN Analysts question how long regional armies can sustain the tempo of the current offensive, without financial and logistical support from Western powers. The African nations want theUnited Nations to set up a trust fund to finance the operations. And even if Boko Haram is driven from the main towns of northeast Nigeria, analysts warn that it will remain a potent rural guerrilla force, capable of bombing attacks. But the speed of recent gains against the group has taken many by surprise. The recapture of Baga, a town to the southeast on the shores of Lake Chad that was the scene of one of Boko Haram's worst massacres in January, was hailed as a major psychological victory for the allies. The town was host to a Multinational Joint Task Force for the Lake Chad Basin until it fell. A Reuters witness saw the flags of Nigeria, Niger and Chad fluttering above the base, near a sign post riddled by bullets. "We have taken back our base. Tell the world never again," soldiers shouted at visiting journalists. In the recaptured village of Shagui, taken by Boko Haram in early November, students who have returned to school remain wary of the Islamist group, whose name in the local Hausa language means 'Western education is forbidden'. "We are not afraid of being in school because we have soldiers here," said Asmoah Yusuf, 17, who fled into the bush during the initial attack. "But we still feel a bit afraid because when the town was attacked, the soldiers ran." – Reuters