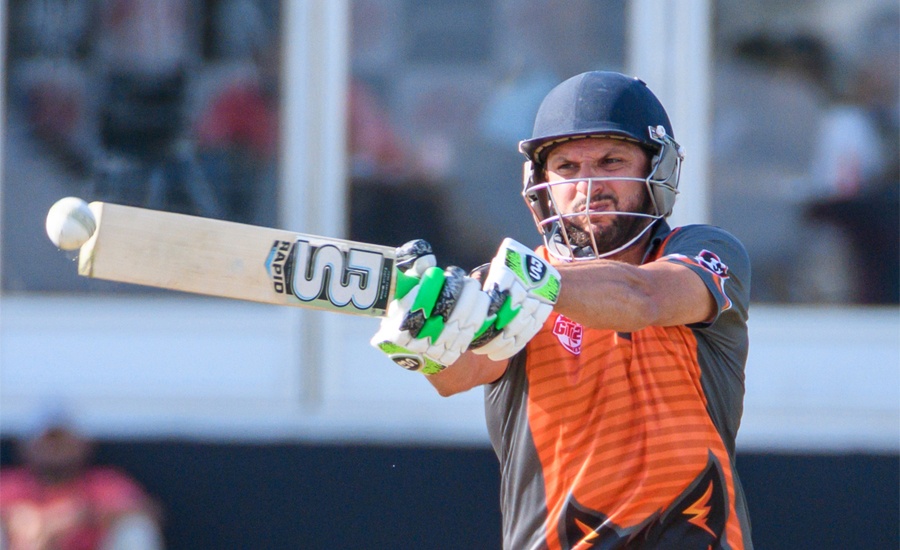 BRAMPTON (92 News) – Pakistani cricketer Shahid Afridi rolled back the years as he smashed a blistering half-century for Brampton Wolves in their Global T20 Canada fixture against Edmonton Royals. After his tremendous performance, Shahid Afridi once again reminded the world why he earned the nickname of “Boom Boom”. Afridi, who represented Pakistan in 27 Tests, 398 One-Day Internationals (ODIs) and 99 Twenty20 Internationals (T20Is) for Pakistan over the course of his illustrious career, once again stole the limelight with his blistering knock. His innings included 10 fours and five sixes. The all-rounder made 81 runs off 40 deliveries with the help of 10 boundaries and five sixes, with his knock helping his side win the match by 27 runs.

Watch @SAfridiOfficial hitting the ball out of the stadium with so much ease. Exciting atmosphere in the stadium..BOOM! #GT2019 #BWvsER pic.twitter.com/zxYersLyAz

In a match played at Brampton, the home side won the toss and elected to bat first. Thanks largely to the explosive innings of Afridi and Lendl Simmons’ 59-run innings at the top of the order, Brampton posted 207-5 in their allotted 20 overs. Afridi found support in West Indian Lendl Simmons, who made 59 off 34 balls after hitting five fours and five maximums. In response, Edmonton managed 180-9 in their 20 overs. New Zealand star Jimmy Neesham top-scored with 33 while Richie Berrington and skipper Faf du Plessis scored 28 and 21 runs. Zahoor Khan and Ish Sodhi took three wickets each while Pakistan pacer Wahab Riaz bagged two wickets for the side. After his brilliant innings with the bat, Afridi also had a good outing in the second innings. He claimed the wicket of fellow Pakistan all-rounder Mohammad Hafeez while also bagging important catches of South Africa’s Faf du Plessis and Neesham. For his match-winning contribution, the 39-year-old was also declared the player of the match.