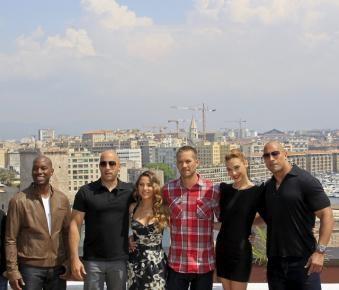 LOS ANGELES - When his lead actor died suddenly, James Wan knew there was not another director who could give him advice on how to finish the film. Wan was in the midst of the punishing production of "Furious 7" - his first big-budget movie in Universal Pictures' most lucrative and longest-running franchise "Fast & Furious" - when Paul Walker was killed in a car crash in Southern California during a break in November 2013. "We were just emotionally stricken by it all and it took me a long time after the initial shock even to think about whether or not I could complete the film," Wan told Reuters ahead of the release of "Furious 7" next week. How the 38-year-old director and his cast and crew handled Walker's demise promises to be one of the most talked about features in one of the year's biggest films. The $190 million movie opens in US theaters April 3 and is expected to break April box office records with a $115 million debut weekend. After a halt in production, the crew began sifting through thousands of hours of shots of the 40-year-old Walker, not only from "Furious 7," but also previous films in the car-studded saga. "There were many sleepless nights poring over hours of footage trying to cull, not just for visuals, but also audio stuff Paul had done," Wan said. In addition to technological sleight of hand, they brought in Walker's two younger brothers as stand-ins. "I think the biggest compliment I have taken away from all the screenings so far is that people say the movie plays pretty seamlessly," the Australian director said. 'RETIRE HIM GRACEFULLY' Critics agree and encourage audiences to forego trying to figure out the tricks. Variety film critic Scott Foundas said "for most of the time Walker is on screen (which is quite often), it's nigh impossible to tell whether he is fully real or partly virtual." Walker reprised his role as former cop Brian O'Conner who joins an eclectic band of street racers led by Dominic Toretto, played by Vin Diesel, in a globe-trotting battle against evil. Wan knew right away he would not let Walker's character die. "Luckily everyone felt the same way," Wan said. "The only thing to do here is to retire him gracefully and send him off in the most honorable way we could think of." Once they figured out the story, they went back to reshoot parts. The film's July 2014 release was delayed nine months. "It was a giant puzzle that was very hard to wrap your head around," Wan said. "No one has faced anything as unprecedented as this. I couldn't just pick up the phone and say 'What did you do when this happened to you?'" As to whether there will be another film in Universal's franchise with him directing, Wan gives nothing away. "This one definitely beat the crap out of me...so taking a break would probably be the right thing to do right now," he said. - Reuters