After cabinet backing, May girds for Brexit battle in parliament 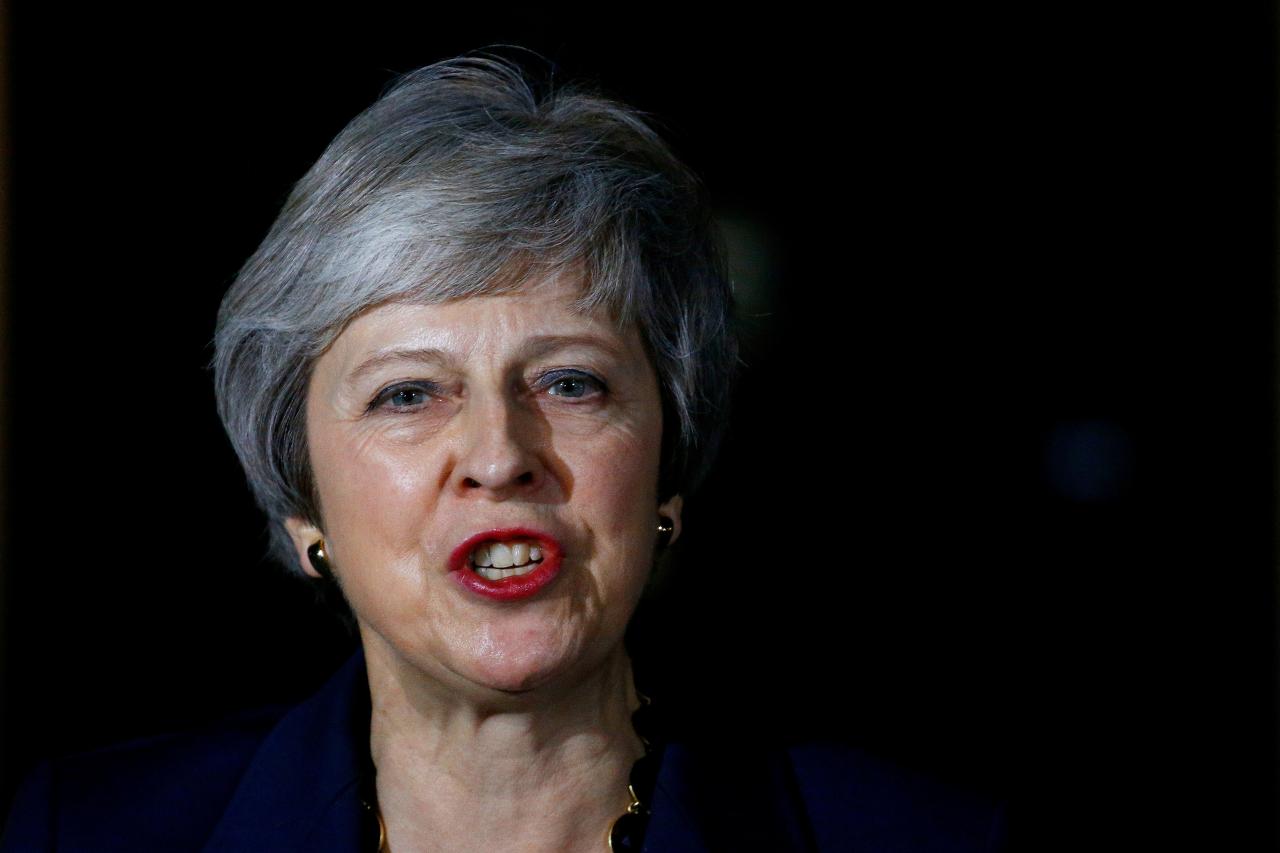 After cabinet backing, May girds for Brexit battle in parliament

LONDON (Reuters) - Prime Minister Theresa May won the backing of her senior ministers for a draft European Union divorce deal on Wednesday, freeing her to tackle the much more perilous struggle of getting parliament to approve the agreement. More than two years after the United Kingdom voted in a referendum to leave the EU, May told reporters outside her Downing Street residence that she had won over her divided cabinet, which includes some senior Brexiteers. “The collective decision of cabinet was that the government should agree the draft withdrawal agreement and the outline political declaration,” she said, after a five-hour meeting. Speaking over protesters shouting anti-Brexit slogans from the end of Downing Street, she said the deal, 585 pages long, was the best that could be negotiated. “When you strip away the detail, the choice before us was clear: this deal, which delivers on the vote of the referendum, which brings back control of our money laws and borders, ends free movement, protects jobs security and our Union; or leave with no deal; or no Brexit at all,” she said. No ministers threatened to resign over the deal, which May hopes will satisfy both Brexit voters and EU supporters by ensuring close ties with the bloc after Britain leaves on March 29. But the weakest British leader in a generation now faces the ordeal of trying to push her deal through parliament, where opponents lined up to castigate the agreement, even before reading it.

Brexit will pitch the world’s fifth largest economy into the unknown. Many fear it will divide the West as it grapples with both the unconventional US presidency of Donald Trump and growing assertiveness from Russia and China. Supporters of Brexit admit there may be some short-term pain for Britain’s $2.9 trillion (£2.23 trillion) economy. Notably, the deal will give Britain’s vast financial centre, the biggest source of its export and tax revenue, only a basic level of access to the bloc’s markets after Brexit. Such an arrangement would give Britain a similar level of access to the EU as major U.S. and Japanese firms, while tying it to many EU finance rules for years to come. But keen Brexiteers say that, in the long term, Britain will prosper when cut free from the EU - which they cast as a failing German-dominated experiment in European integration. May gave no date for a vote in parliament but she will need the votes of about 320 of the 650 MPs. It is unclear whether she has the numbers. A senior Eurosceptic lawmaker said the cabinet decision was a majority decision, not a unanimous one. Asked if anyone had threatened to resign, a senior government official who declined to be named said “nobody”, adding: “The PM used the word ‘impassioned’ for a reason, and clearly there are strongly held views on this subject, which we acknowledge.” During the cabinet meeting, British journalists said anger among Brexit-supporting Conservative MPs was so high that they might call for a vote of no confidence in her leadership. There was no confirmation.

The ultimate outcome for the United Kingdom remains uncertain: scenarios range from a calm divorce to rejection of May’s deal, potentially sinking her premiership and leaving the bloc with no agreement, or another referendum. European Commission President Jean-Claude Juncker recommended that EU leaders should now go ahead with a delayed summit to rubber-stamp the agreement. This is likely to take place on Nov. 25, diplomats said. But EU chief negotiator Michel Barnier cautioned that the road to ensuring a smooth UK exit was still long and potentially difficult. May, an initial opponent of Brexit who won the top job in the turmoil following the referendum, has staked her future on a deal that she hopes will solve the Brexit riddle: leaving the EU while preserving the closest possible ties. But few are satisfied. Brexit supporters in May’s party, which has been riven by a schism over Europe for three decades, said she had surrendered to the EU and that they would vote down the deal. Opponents of Brexit say Britain will lose more than it can possibly gain from quitting such a big single market and political alliance. Some want another referendum. Opposition Labour Party leader Jeremy Corbyn called it a “botched deal”. The Northern Irish Democratic Unionist Party (DUP) which props up May’s government, said it would not back any deal that treated the British province differently from the rest of the United Kingdom. “If she decides to go against all of that, then there will be consequences,” DUP leader Arlene Foster said, though she refrained from explicitly opposing the deal. She was due to meet May on Wednesday night.

The most difficult issue in the talks was the Northern Irish ‘backstop’, an insurance policy to avoid a return to border checks between the British province and EU-member Ireland that could threaten a 1998 peace accord, which ended 30 years of violence. The draft deal envisages a July 2020 decision on what would have to be done to make sure the border stays open after the post-Brexit transition runs its course if a new trade deal is not in place by then. Either Britain would have to extend the transition period once beyond December 2020, or go into a customs arrangement that would cover all of the United Kingdom. Under those arrangements, Northern Ireland would be aligned more closely with the EU’s customs rules and production standards. Any changes to or termination of those arrangements, after the end of the transition, would have to be agreed between London and Brussels. Irish Prime Minister Leo Varadkar, whose desire to avoid a hard border was central for Brussels, said the deal satisfied all Dublin’s key priorities. But it is unclear if the arrangement will pass muster in parliament as many pro-Brexit MPs have demanded Britain must be able to unilaterally withdraw from the backstop to avoid being chained to the EU in perpetuity. “I cannot support the proposed agreement in parliament and would hope that Conservative MPs would do likewise,” Jacob Rees-Mogg, leader of an influential group of pro-Brexit Conservative MPs, wrote in a letter to his party colleagues.