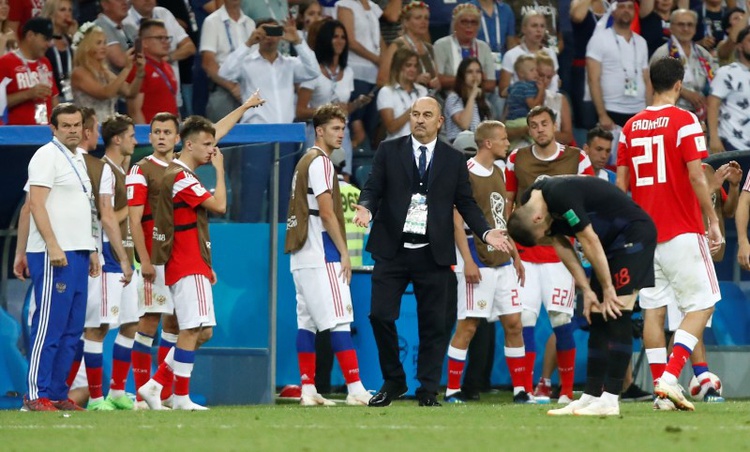 MOSCOW (Reuters) - Russian manager Stanislav Cherchesov said his side was disappointed after exiting the World Cup at the quarter-finals despite having made the country’s best run at the tournament, TASS news agency reported on Friday.
“If you take the emotional side, (we ended on) a positive note,” Cherchesov told TASS. “But on the sports side... sports are about titles. And we don’t have a title. So for this we are disappointed of course.” Russia qualified automatically for the World Cup finals as the host country and entered the tournament as the lowest-ranked team. But wins against Saudi Arabia and Egypt in the group stage allowed Russia to reach the World Cup knockout stage for the first time since the collapse of the Soviet Union in 1991. Russia then went on to eliminate Spain in the round of 16 after veteran goalkeeper Igor Akinfeev saved two penalty kicks. Cherchesov’s side finally fell to the eventual finalists Croatia at the quarter-final stage, losing 4-3 on penalties. “We hope that a new era will start in Russia, that everyone will want to play soccer,” Cherchesov said. “That’s the most important thing, in fact.” France will face Croatia in the final at Moscow’s Luzhniki stadium on Sunday.