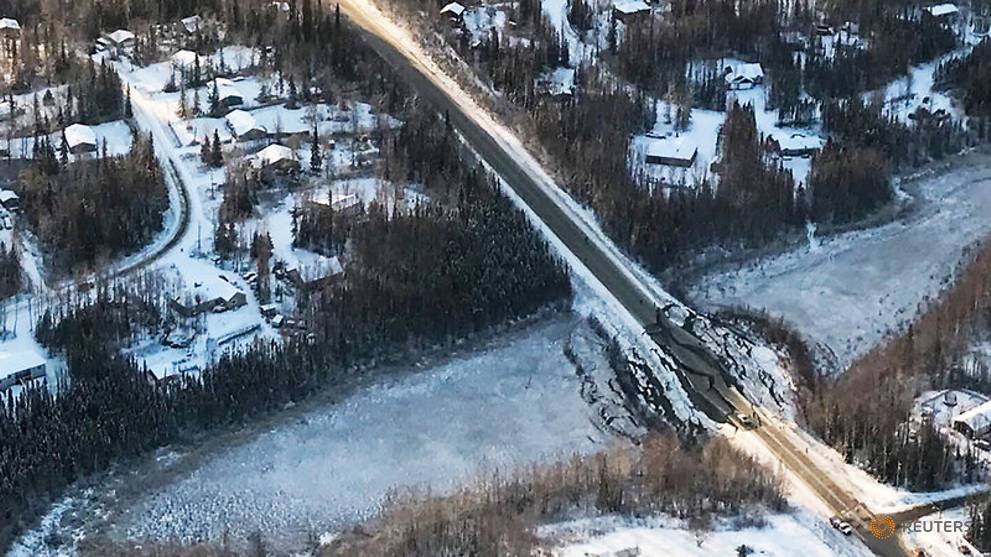 ANCHORAGE, Alaska (Reuters) - Aftershocks from Friday’s powerful Alaskan earthquake continued to pound the area around Anchorage , as workers strove to patch up buckled roads and residents began cleaning up damage around their homes and businesses. The 7.0 magnitude quake struck Friday morning about 8 miles (13 km) north of Anchorage, the state’s largest city with 300,000 residents, disrupting rush-hour traffic and jamming telephone service. There were no reports of serious injuries. “We are on the road to returning to normal,” Anchorage Mayor Ethan Berkowitz said at a news conference . He credited the region’s strict building codes with minimising damage and preventing many injuries. State transportation crews and contractors were already on scene to make closed roads usable as soon as possible, and the Anchorage School District said maintenance and recovery workers were assessing damage to school buildings to make sure they were safe, officials said. The state identified 47 earthquake-damaged roads and bridges, most of which cannot be fully repaired until the region’s dark and snowy winter has passed. But even as cleanup began, as many as 650 aftershocks continued to rock the area, Alaska State Seismologist Mike West said in an interview. “It will take months for the rate of the aftershocks, the rate at which they’re occurring, to drop down to what you would consider background levels,” he said, although the vast majority were too small to cause damage. In a letter to parents and staff, Anchorage School District Superintendent Deena Bishop said that “many, if not all,” schools sustained damage in the quake, and that it was securing its buildings to protect valuables that students and teachers left behind as they fled. The district was aiming to reopen its schools by Wednesday. The city is keeping a tally of costs associated with the quake, but did not yet have an estimate, said Municipal Manager Bill Falsey. North of Anchorage, the Matanuska-Susitna Borough also sustained considerable damage, including the wreck of Vine Road. Most of the borough’s schools will also be closed until Wednesday, the Matanuska-Susitna School District said. There had been no serious earthquake-related injuries reported, and crews were working to set up detours around some heavily damaged roads, officials said. Anchorage’s Port of Alaska, which handles half the goods shipped to the state, is also being evaluated for damages, Falsey said. Workers there were in the process of unloading fuel from a tanker when the quake hit, Falsey said. The biggest transportation problem area is the sole route headed north from town, the Glenn Highway, Falsey said. Much of that highway was ripped apart in the quake, and motorists must detour around a damaged bridge, he said.