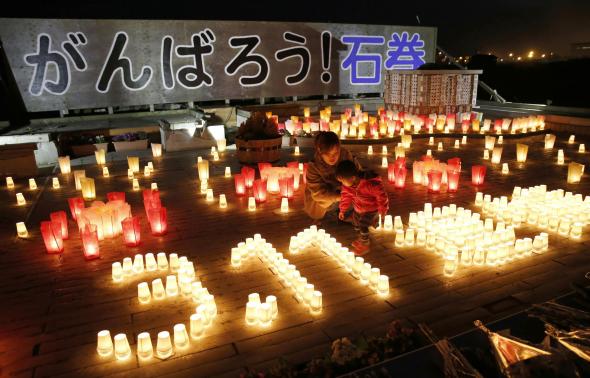 TOKYO (Reuters) - Four years after a magnitude 9 earthquake shook northern and eastern Japan, the region is rocked by tremors at more than double the average rate of the decade before the disaster, a report this week from the Japan Meteorological Agency shows. In the latest 12 months there were 737 quakes registering at least "1" on the Japanese intensity scale of 1-7 in the quake zone, which runs more than 500 km (300 miles) from Tokyo's eastern suburbs up the northeast coast nearly to the northern tip of the main island of Honshu. From 2001 to 2010, agency data shows, the annual average was 306. The agency warns that there remains a risk of large aftershocks in the region, which includes the area of the wrecked Fukushima nuclear plant. Scientists say that while the quakes are getting weaker, the numbers are still a concern. Last month alone there were 64 quakes of magnitude 4 or higher in the quake zone. While the Japanese scale measures the intensity of shaking on the surface, with the lowest reading of "1" felt only slightly if at all, magnitude measures the amount of energy released by a quake. "In general, when there are a lot of small quakes that means it's easier for there to be a larger one as well," said Shinji Toda, a professor at Tohoku University's International Research Institute of Disaster Science in Sendai. "Of course, we can't say when." While the report focused on the northeast, all of Japan is effectively a quake zone where three tectonic plates intersect, generating about one-fifth of the world's magnitude 6-plus quakes. In November, a magnitude 6.8 tremor rocked the central Japan prefecture of Nagano, injuring 13. Toda said areas such as Fukushima and northwest Japan's Akita prefecture, which sits outside the region hit directly by the March 11 quake, are still feeling the impact. "There's the possibility that some of this could go on for a hundred years," he said. [caption id="attachment_8004" align="alignnone" width="500"] 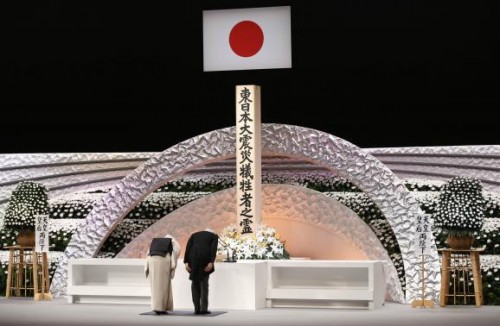 Japan's Emperor Akihito (R) and Empress Michiko bow in front of the altar for the victims of the March 11, 2011 earthquake and tsunami at the national memorial service in Tokyo March 11, 2015.[/caption] [caption id="attachment_8005" align="alignnone" width="500"] 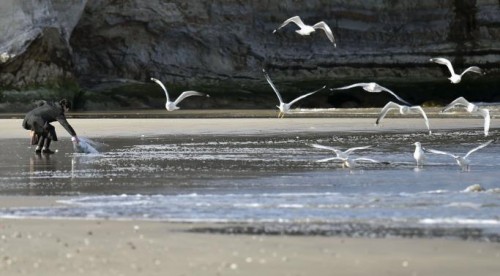 A woman offers a bouquet of flowers towards the sea in Iwaki, Fukushima prefecture, in this photo taken by Kyodo March 11, 2015.[/caption]