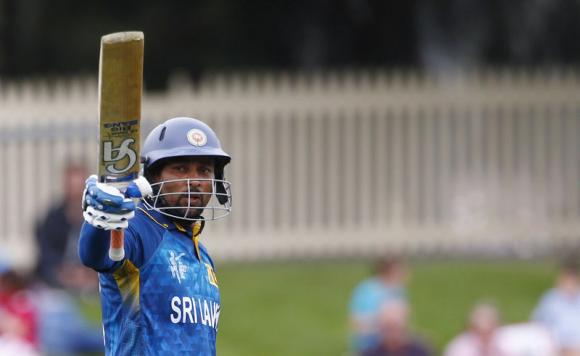 MUMBAI - The pressure will be on former captain Tillakaratne Dilshan to continue to play a pivotal role for Sri Lanka when he loses his prolific batting partner after the World Cup. Kumar Sangakkara, the second highest run-getter in one-day internationals behind Sachin Tendulkar, will retire from the 50-over format after the tournament leaving a huge hole in Sri Lanka's batting lineup. Opening batsman Dilshan and number three Sangakkara added 210 runs against Bangladesh, 130 versus co-hosts Australia and 195 against minnows Scotland and are the second most successful pair in ODIs with 20 hundred-run stands between them. Sangakkara's solid batting technique is in sharp contrast to the more dashing, innovative Dilshan. The contrasting styles only swelling the problems for an opposition captain, who also has to contend with the left-right combination when setting a field against them. Dilshan, who is famous for his 'Dilscoop', a shot he plays by going down on one knee to hit the bowler over the wicketkeeper's head, mixes power with bat speed. He can smack boundaries with minimum footwork, as Australian fast bowler Mitchell Johnson found out to his cost when the Sri Lankan hit him for six fours in an over. While the 37-year-old Sangakkara leads the table of run-getters at the ongoing World Cup with four consecutive centuries, Dilshan is not too far behind with two hundreds and a fifty and is fourth on the list. And with Mahela Jayawardene also set to retire from all formats after the World Cup, Dilshan knows he will be the guiding light for Sri Lanka's young batsmen going forward. "My ambition is to continue playing ODI and T20 cricket," Dilshan said during the early weeks of the World Cup. "After the World Cup I will have to discuss with my captain and the team management what my future role in the team will be. "If they think that I have a role to play I will continue to represent my country. With my present form and fitness I guess I can easily play for another two-three years, even till the next World Cup in 2019." At 38, Dilshan still remains one of Sri Lanka's best fielders and is also a very useful off-spinner. The absence of Sangakkara and Jayawardene in the team after the World Cup will also mean that he will be the only go-to man for young captain Angelo Mathews. Dilshan, also a former skipper, gave up playing tests two years back to make room for younger players in the side and will not hesitate doing it again in other formats when he feels the time is right. "I will do the same in the other two formats also if I think I am not good enough to be in the side," he said. "I haven't taken that decision yet because two key players are retiring from ODI cricket and I believe my experience will be valuable to the captain and the team in the two formats. "We have problems with openers. If I can help them fill that void using my experience I will quit." - Reuters