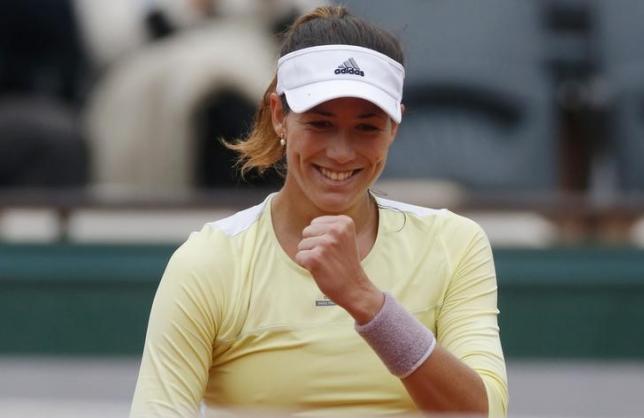 MADRID - Spanish fourth seed Garbine Muguruza reached the French Open quarter-finals for the third year in a row when a solid display earned her a 6-3 6-4 victory against former champion Svetlana Kuznetsova on Sunday. Muguruza, who has yet to make it to the last four in Paris, played aggressively throughout, leaving little breathing space for the Russian 13th seed, the 2009 Roland Garros champion. Muguruza peppered the court with winners -- which made up for numerous unforced errors -- and broke decisively on her seventh opportunity to lead 5-3 in the opening set. She closed it out with a booming forehand winner and broke again in the third game of the second set with a service return winner. Kuznetsova saw a lifeline when she broke back to 4-4 as Muguruza started to get inconsistent, only for the Spaniard to break again in the following game with a fine passing shot. Muguruza, however, showed signs of nerves and wasted two match points before serving a double fault. She regained her composure, though, and wrapped it up on her fifth match point when Kuznetsova's backhand sailed long. The Spaniard will next face either American Shelby Rogers or Romanian 25th seed Irina Camelia Begu. -Reuters