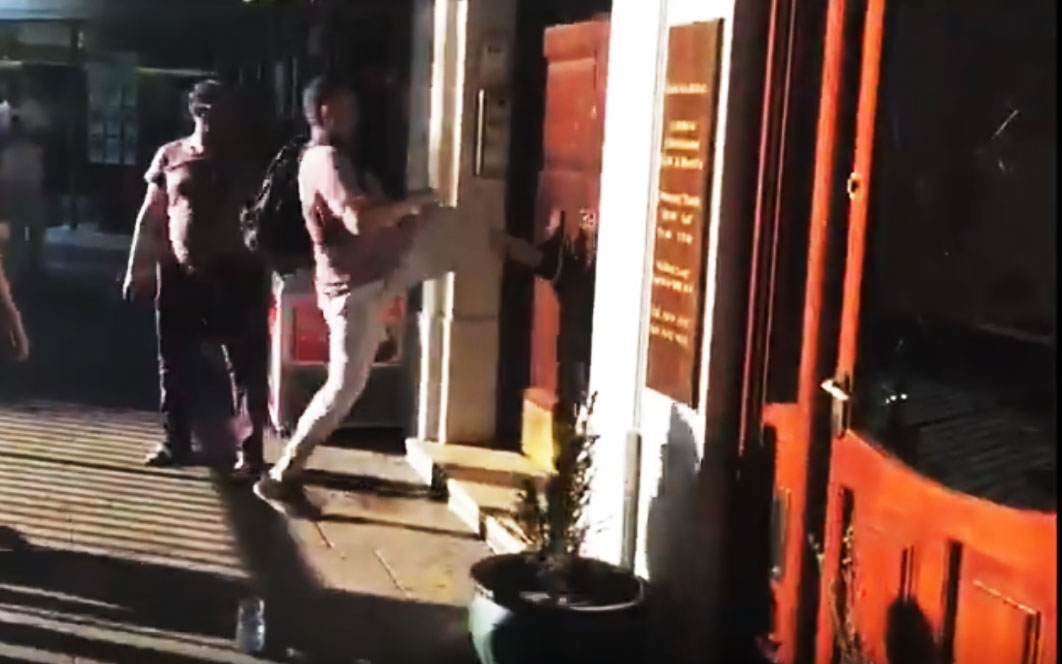 LONDON (92 News) – The protestor gathered outside the Avenfield apartments in London and they tried to break the door of Sharif's Avenfield flats. According to the video clip, it can be seen that a enraged protestor kick down the door and trying to break the door of Sharif's Avenfield apartments. During the scene, soon after former prime minister Nawaz Sharif entered the house along his son Hussain Nawaz. When Nawaz and Hussain along local leader of Pakistan Muslim League Nawaz (PML-N). Ejaz Gull were entering in the house when the already available aggressive protesters surrounded all of them. aggressive protesters also thrown shopping cart (trolley) at Ejaz Gull a local leader of Pakistan Muslim League Nawaz (PML-N). From protestor one of them tried to go towards Nawaz Sharif, Ejaz Gul stopped him. After seeing the situation, Nawaz Sharif was surprised and both father and his son entered to the house from avoiding deteriorated the situation. The young protestor scolded with Ejaz Gul and aggressive protester also thrown shopping cart (trolley) at Ejaz Gull. https://www.youtube.com/watch?v=M1Em05vbU-A A heavy contingent of police immediately rushed to the Sharif family's Avenfield apartments when the protest turned violent, while Scotland Yard police controlled the situation. The PML-N leaders also alleged that the PTI protestors have knife during the attack on them. Meanwhile, Metropolitan police said that they have obtained footage of the attackers and will take action for attempted assault and damage to property. On Friday, Accountability Court-I judge Muhammad Bashir awarded the 11-year rigorous imprisonment to Nawaz with £8 million fine, while his daughter Maryam Nawaz was awarded eight-year imprisonment with £2 million fine. Earlier today, Nawaz Sharif’s son-in-law Captain (r) Safdar, who has been arrested on Sunday , was sent to Adiala Jail over one-year rigorous imprisonment in the case.