Ahmed Shehzad ends up in hospital in a neck brace

Ahmed Shehzad ends up in hospital in a neck brace

PORT-OF-SPAIN (92 News) – Pakistan’s Ahmad Shahzad made a stunning recovery from injury to help Pakistan edge out the West indies by three runs in their second T20 clash in Trinidad and Tobago.

The Pakistani batsman collided with Chadwick Walton during the second innings and was taken off the outfield in an ambulance in a neck brace with fears he had suffered a concussion. 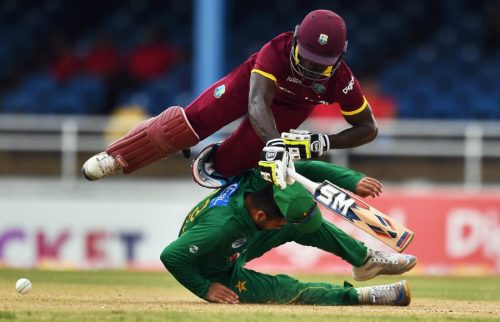 Remarkably, Shehzad was able to rejoin the game before the end of the West Indian innings having been given the all-clear by doctors. But there was real concern for his well-being at the time, as medics rushed to his side on the wicket in Port-of-Spain.

‘Initially, [Shehzad] showed concussion signs and pain within the neck,’ Shane Hayes said. ‘Ahmed returned from hospital after imaging found nothing wrong with his spine.’

The visitors' victory leaves them with an unassailable 2-0 lead in the four-match series.