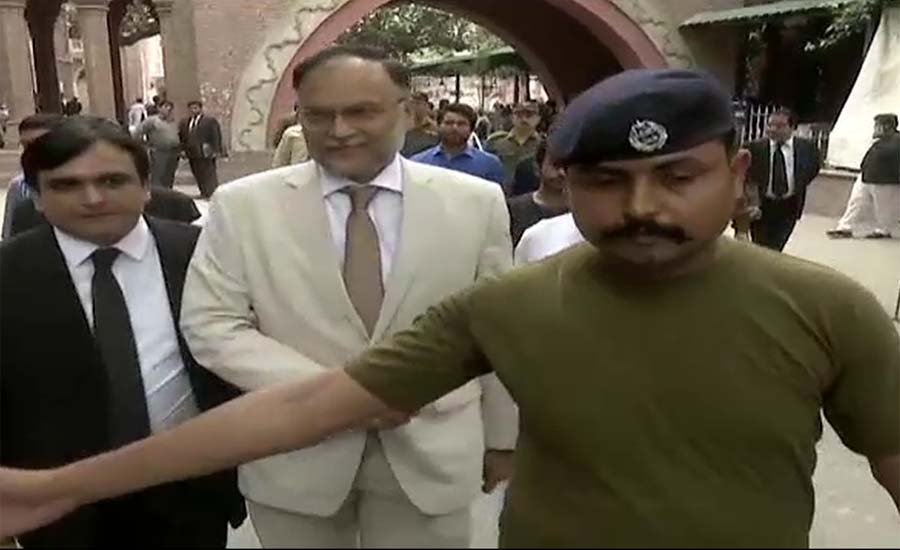 LAHORE (92 News) – Former interior minister Ahsan Iqbal on Friday tendered unconditional apology before a full bench of Lahore High Court and submitted his detailed reply in contempt of court case. A three-member full bench headed by Justice Mazahir Ali Akbar Naqvi heard the case. Ahsan Iqbal appeared before the LHC. He said that he always respected the judiciary. He also said that he regained his life after coming back from near to death, adding that he has no value of any designations in his mind. Justice Muzahar Ali Naqvi remarked that yesterday one man was disqualified, he was saying outside the court that he did not tender apology. "Your written reply has not consist the words for apology which should be mentioned as per law," the justice added. The court adjourned the case till Monday and sought reply over this. Talking to the journalists outside the court, the former interior minister said that one sided actions are being taken against the PML-N. He declared that the Pakistan Tehreek-e-Insaf (PTI) is amalgamation of PML-Q, PPP and PML-N turncoat members. “Imran Khan himself will be seen winding out from his balloon on July 25. The PTI chief seems to be same place where before at 2013," he maintained. In previous hearing on Friday, the LHC ordered Ahsan Iqbal to submit complete reply in contempt of court case. “If you want to take exemption from the personal presence, It can be given because it’s your right but the court will decide as per given law. “You went to tell the children about the country’s policy but started talking about judges. Was the ceremony the accurate platform to speak about judiciary?,” Justice Athir Mehmood remarked. Expressed anger, Justice Mazahar Ali Akbar said “you are repeating again and again that you returned to Pakistan after getting education from abroad. Did anyone write a letter to return Pakistan? Do you want to run this country without any accountability.”