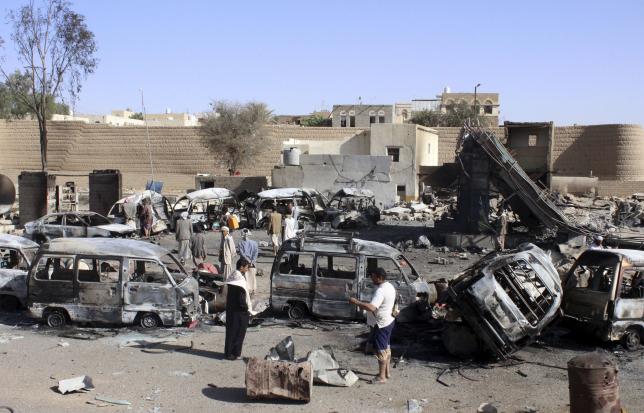 RIYADH - International aid agency Oxfam has condemned a Saudi Arabian air strike inYemen that it said hit one of its stores containing humanitarian supplies in the Houthi militia's northern stronghold of Saada. Riyadh, which has led a coalition of Sunni Muslim allies with Western support in three weeks of air strikes to stop the Iranian-allied Houthis gaining power, has faced growing criticism over Yemen's growing humanitarian crisis. "We have shared detailed information with the coalition on the locations of our offices and storage facilities. The contents of the warehouse had no military value. It only contained humanitarian supplies," said Grace Ommer, Oxfam's country director, in a press statement posted on its website on Sunday. Saudi Arabia has not yet commented on the incident, but the spokesman for its military campaign, Brigadier General Ahmed Asseri, has said targets are chosen to avoid civilian casualties, and that the Houthis often put guns in residential areas. On Saturday, King Salman announced that Saudi Arabia would meet the entirety of aUnited Nations $274 million appeal for humanitarian aid in Yemen, state media reported. On Friday Riyadh rejected a call by UN Secretary General Ban Ki-moon to halt strikes. Yemen's dire humanitarian situation, already regarded by aid organizations as critical before the Saudi air strikes began, has been worsened as a result of weeks of fighting and a naval blockade aimed at stopping arms flowing to the Houthis. Most of Yemen's food needs before the crisis were met by imports via the sea, diplomats have said. Relief agencies criticized Saudi Arabia in the first two weeks of the campaign for the difficulty in arranging shipments of aid, including food and medicine, into the country, but the first Red Cross shipments began to arrive last week. A worsening humanitarian situation risks undermining Saudi Arabia's political strategy inYemen of maintaining the legitimacy of President Abd-Rabbu Mansour Hadi, now in exile in Riyadh, and restoring his government to power, analysts say. If Yemenis blame their harder circumstances on the Saudi-led air strikes rather than the preceding military advance by the Houthis, President Hadi's legitimacy may start to be called further into question, they say. - Reuters