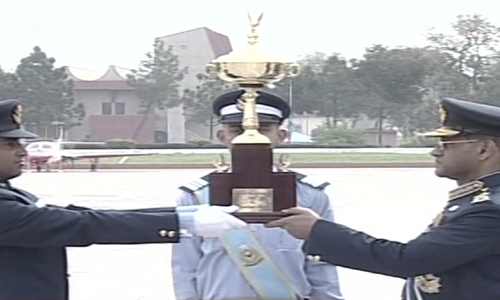 RISALPUR (92 News) – Air Chief Marshal Sohail Aman has said that qualified training and professional skills are the characteristics of the Pakistan Air Force. Addressing the passing-out parade of cadets as chief guest at Risalpur Academy on Thursday, he specially appreciated the performance of Saudi cadets. “These cadets are an example for the next generations.” He said that Pakistan has always been striving for peace. The Air Chief said that the PAF had fulfilled its responsibility efficiently in the Zarb-e-Azb operation. “The PAF has played an important role in overcoming terrorism.” Air Chief Marshal Sohail Aman said: “No one can cast an evil eye on our freedom.” He said that the professional skills of the PAF are its peak. “The PAF is ready to deal with any challenges.” The cadets saluted the chief guest as they marched elegantly in the parade. Later, the air chief reviewed the parade and conferred awards and honours upon the distinguished cadets that included two females. Pilot Officer Ahsan Naveed was awarded the Sword of Honour, while Pilot Officer Kashif Hayat was bestowed Chief of Air Staff Trophy. The champion squadron was awarded the Quaid-e-Azam banner by the chief guest. The Best Performance Trophy was awarded to Pilot Officer Muhammad Osama in the General Service Training.