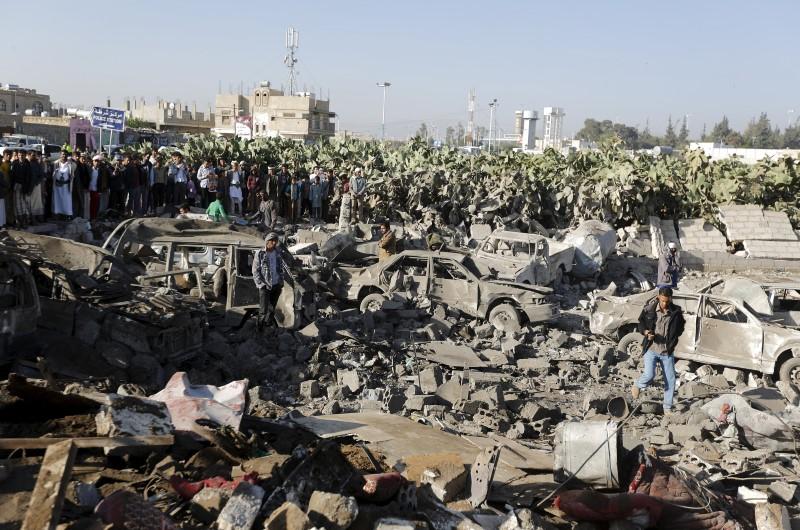 DUBAI - An air strike at a camp for displaced people and refugees in Houthi-controlled northern Yemen on Monday killed 45 people and wounded 65, the International Organization for Migration said. The strike hit the vicinity of the Mazraq refugee camp in northern Yemen, spokesman Joel Millman said, citing IOM staff at the scene. He said it was not immediately clear how many of the casualties were civilians or armed personnel. A Saudi-led coalition was bombing Yemen for a fifth day on Monday to try to weaken the Iranian-allied Houthi militia and allied military units. The air attacks have also targeted their southward advance on the port city of Aden, the last bastion of the Saudi-backed president, Abd-Rabbu Mansour Hadi. Another humanitarian official said earlier that the strike had hit a truck full of Houthi militiamen at the gate to the camp, killing nine residents, two camp guards and an unknown number of fighters. The Houthi-controlled Defense Ministry had said on its website that 40 people, including women and children, had been killed and another 250 people had been wounded. Saudi officials were not immediately available for comment. Mazraq, in the province of Hajja next to the Saudi border, is a cluster of camps home to thousands of Yemenis displaced by over a decade of wars between the Houthis and the Yemeni state, as well as East African migrants. Over the last five days of Saudi-led bombing, around 750 families have been displaced to the camps from the Houthi heartland region of Saada in the far north. Another air strike in the vicinity on Saturday killed several soldiers, the official added. - Reuters