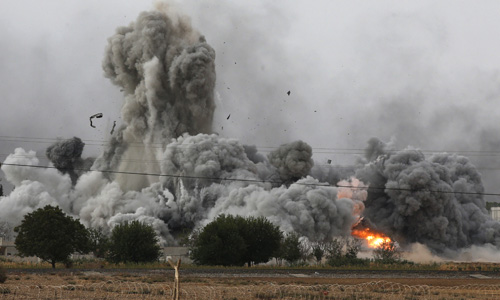 BEIRUT - A US-led coalition air strike in Syria hit an oil refinery run by the Islamic State militant group near the border with Turkey on Sunday, killing 30 people, the Syrian Observatory for Human Rights reported. Rami Abdulrahman, who runs the Observatory, said the dead were refinery workers and Islamic State militants. The targeted refinery was just northeast of the town of Tel Abyad near the Turkish border, he said. Asked about the report, a spokesman for the US Combined Joint Task Force overseeing the fight against Islamic State, said, "When an allegation of civilian casualties caused by US or coalition forces is determined to be credible, a thorough investigation would be launched to determine the accuracy of the claim and any circumstances surrounding it." The spokesman said US and coalition forces had implemented "significant mitigation measures within the targeting process and during the conduct of operations to reduce the potential of civilian casualties and collateral damage." The Islamic State group has seized wide areas of Syria and Iraq, declaring them part of a cross-border "caliphate". The territories it controls in northern and eastern Syria include oil-producing regions that have financed the group's activities. In November, the United Nations estimated Islamic State's revenue from oil ranged between $846,000 to $1.6 million a day. But the Pentagon has assessed that oil was no longer the main source of revenue for Islamic State. Western diplomats have said this was due to air strikes on oil installations and a plunge in global oil prices that has affected black market prices as well.