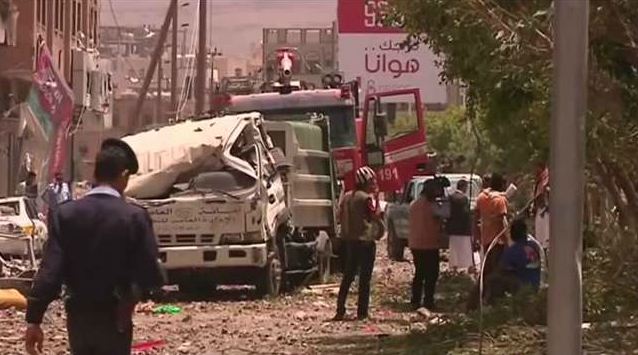 SANAA - An air strike on a Scud missile base in the Houthi rebel controlled Yemeni capital Sanaa triggered a big explosion that blew out windows in homes, killing at least fifteen people and wounding dozens on Monday, medical sources said. Saudi Arabia has led an alliance of Sunni Arab countries in air strikes against the Iran-allied Shi'ite Houthi group and army units loyal to ex-president Ali Abdullah Saleh. Yemen's state news agency Saba, run by the Houthi movement, said the bombing resulted in "dozens of martyrs and hundreds of wounded", citing a city official. The reference to "dozens martyred" might suggest that a larger number of soldiers at the base had been killed. The blast hit the base on Faj Attan mountain beside the Hadda district, home to the presidential palace and many embassies, and sent a tall mushroom cloud into the air. Resident Adel Mansour said it was the largest explosion in more than three weeks of bombing by the Saudi-led coalition. "For the first time since the start of the bombing the windows of my house smashed," Mansour said. "My children are terrified and one of my relatives fainted because of the force of the blast." The campaign has repeatedly targeted the Faj Attan facility along with other military bases and airports in Sanaa and throughout the country. EMBASSIES Iran summoned Saudi Arabia's envoy to Riyadh on Monday over the explosion near its embassy in Sanaa, Iranian state TV said. The Shi'ite Islamic Republic has repeatedly summoned the Sunni-ruled kingdom's envoy over disputes arising from a conflict seen as a struggle for influence between the two regional powers. Indonesia's foreign minister Retno Marsudi told reporters in Jakarta his country condemned the air strike after two of the country's diplomatic staff were wounded and its embassy was damaged. The explosion also killed three workers at the headquarters of a television station, YemenToday, owned by ex-president Saleh, employees told Reuters. Brigadier General Ahmed Asseri, Saudi spokesman for the campaign, told state news outlet SPA the operation had entered a "new phase". "The next phase will focus on the movements of militias, protection of civilians, and support the evacuation and relief," he added, in an announcement that suggested over three weeks of pounding military bases across the country had run its course. A Saudi border guard was killed and two troops wounded by gun and mortar fire fromYemen on Sunday evening, the kingdom's interior ministry said. Several members of Saudi Arabia's forces have been killed in the campaign against the Houthis. The movement's leader Abdel-Malek al-Houthi said in a televised speech on Sunday that the group believed its northern neighbor sought to invade and occupy Yemen, but that his people had the right to resist "by any means". - Reuters