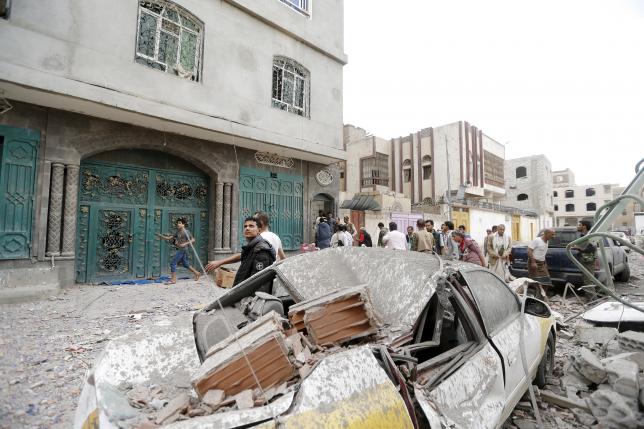 SANAA - Saudi-led air strikes hit Yemen's capital Sanaa early on Friday, targeting weapons storage sites used by soldiers loyal to former president Ali Abdullah Saleh, a powerful supporter of Iranian-allied Houthi militias. The air raids, which targeted parts of the Defence Ministry and other facilities lasted several hours, residents told Reuters by telephone. "The sky was lit up," Sanaa resident Fadel Muhammad said. "We heard big explosions." Houthi fighters who control the capital have also been trying to seize the southern city of Aden from local militias. Saudi Arabia launched air strikes against the Houthis in neighbouring Yemen two weeks ago with a coalition made up mainly of the kingdom and four Gulf Arab allies. The United States said on Tuesday it is speeding up arms supplies to the coalition. Saleh is still highly influential in the military despite having given up power in 2012 after mass protests against his rule, and troops loyal to him are backing Houthi forces fighting his successor President Abd-Rabbu Mansour Hadi. Hadi, a former general seen by the Shi'ite Muslim Houthis as a pawn of Sunni Gulf Arab monarchies and the West, fled Yemen for Saudi Arabia. The conflict in Yemen has raised concerns that regional proxy wars between Sunni Saudi Arabi and Iran could intensify. - Reuters