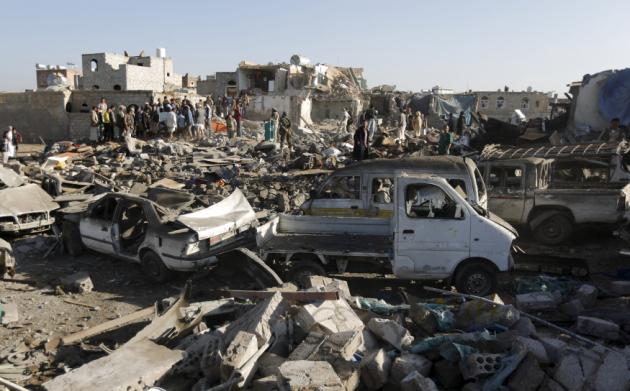 ADEN - Saudi-led air strikes targeting a military camp killed eight civilians in the central Yemeni city of Taiz on Sunday, a medical source said. The air raids were aimed at a site held by soldiers loyal to former Yemeni President Ali Abdullah Saleh who have joined up with Iranian-allied Houthi rebels against local militias in the south, the source said. Saudi Arabia and its Sunni Arab allies began air strikes against the Houthis more than two weeks ago, hoping to halt their advance toward the southern port city of Aden. Saleh remains highly influential despite having given up power in 2012 after mass protests against his rule and troops loyal to him back the Houthis. The campaign has raised fears that a sectarian proxy war between rivals Riyadh and Tehran will further destabilize the Middle East and potentially destroy the Yemeni state. In a sign of the military's weakening control, suspected Al Qaeda militants killed an army colonel in the central Shabwa province on Sunday, a local official said. Separately, an al Qaeda leader was killed in an apparent US drone strike on a group of militants west of the port city of Mukalla on the Arabian Sea, residents told Reuters. It was the first reported drone strike against the powerful Yemeni branch of the global militant group since the US evacuated about 100 special forces troops advising Yemeni forces last month. While the United States and its Sunni Gulf allies are worried about the threat from Sunni radicals such as al Qaeda, they also fear the war will increase the influence of Shi'ite Iran. Saudi Arabia is concerned its war on the Houthis could spill over the border, but Iran has denied Saudi allegations that it has provided military support to the group. The Houthis also deny getting help from Iran and say their armed campaign is designed to stamp out corruption and Sunni al Qaeda militants. According to the United Nations, the conflict, in which the Houthis seized the capital Sanaa in the north in September, has killed 600 people, wounded 2,200 and displaced 100,000 others. Saudi Arabia's Defence Ministry has said more than 500 Houthis have also been killed in fighting on Yemen's border, but has not said how it arrived at that figure. - Reuters