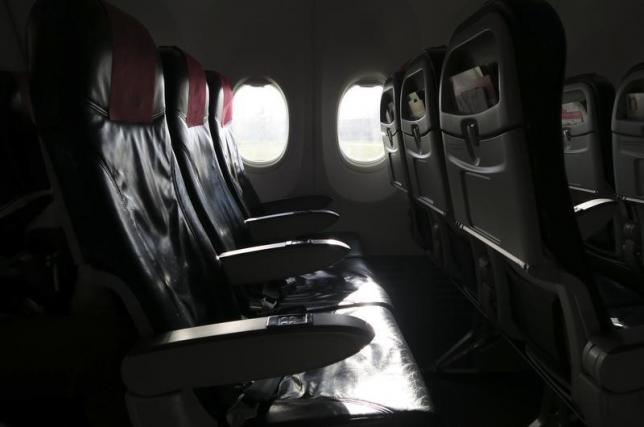 BERLIN - Airlines are packing ever more seats into economy class to protect profit margins from falling ticket prices, prompting concerns over health and safety from travelers and crew. Slim-line designs, extra emergency exits and creative placing of galleys and toilets are all playing their part in the great seat squeeze, say industry watchers. "If you're a dog, you have very specific rules, but if you're a human being there are no specific rules as to what is humane," Charlie Leocha, the head of consumer group Travelers United, told a US government advisory committee examining the issue in Washington D.C. this week. Seat pitch - the distance from one seat to the same spot on the one in front or behind - has shrunk to as little as 28 inches on some flights, against the more common 31 or 32 inches for economy, according to seat makers. Aircraft manufacturers Boeing and Airbus are increasing the number of places that can be squeezed in per row. Making things even tighter for passengers, airlines have got better at managing ticket sales and filling planes, meaning the middle seat is rarely left free. The economic factors are clear. Average ticket prices are expected to fall by 5 percent this year, according to industry body IATA, while airlines are expected to make a their best net profit margin in five years, albeit at just 3.2 percent. But the health and safety impacts are still being debated. AIR RAGE The lack of space has triggered more outbreaks of air rage, Julie Frederick from the Association of Professional Flight Attendants told the Washington D.C. hearing of the Advisory Committee for Aviation Consumer Protections. Several flights had to divert after passengers got into fights over reclining seats and lack of leg room last year. It was also making it harder for crew to get to anyone needing medical help, Frederick added. The number of passengers a type of aircraft is allowed to carry is mainly defined by how quickly people can exit in an emergency, hence the extra exits. Some low-cost airlines such as Ryanair, Spirit and Allegiant have already found one way round the reclining seat problem -- the fixed shell of their non-reclining seats also makes them cheaper to construct. Zodiac and other seat makers have tried bringing in compensations for economypassengers -- extras from tablet holders to in-seat power were on show at this week's Aircraft Interiors Expo in Hamburg. Germany's Recaro showed economy seats with foot rests, in-seat USB and power outlets, a moldable head-rest, a 13.3 inch Panasonic monitor and mood lighting. Panasonic Avionics has worked with seat maker B/E Aerospace on a new economy class seat called Jazz that includes a discreet 'do not disturb' light, inductive charging for devices and an HDMI slot. "Economy seats are on a downward trend, but airlines are adding in perks to make you forget more quickly just how squeezed in you are," said Jason Rabinowitz, data research manager at Routehappy, which rates flight cabins. "The more seats are shrinking, the more technology they're packing in," Rabinowitz added. "The jury is still out as to whether passengers will forget though." - Reuters