BEIRUT – Airstrikes by the Syrian regime and ally Russia killed 16 civilians including seven children in the country’s northwest Wednesday, a monitor said, as Damascus presses an offensive against the jihadist-run bastion Idlib. Among those, six children and six adults lost their lives in regime airstrikes on residential neighborhoods in the town of Maaret al-Noman, the Syrian Observatory for Human Rights said. The town lies on a key supply route running through Idlib province that analysts say is in the sights of the regime. Eight years into Syria’s civil war, the Idlib region is one of the last major bastions of opposition to President Bashar Assad’s regime. Since the start of the month, regime forces have started chipping away at its southern edges following months of devastating bombardment. They did this despite a deal between Moscow and rebel backer Ankara last year to try and avert a full-scale attack that saw Turkish troops deployed to a planned buffer zone in the area. Earlier Wednesday, air raids hit near a Turkish military post in the area of Sheir Maghar, the Observatory said, after Ankara vowed to take necessary steps to protect its troops deployed across the border. 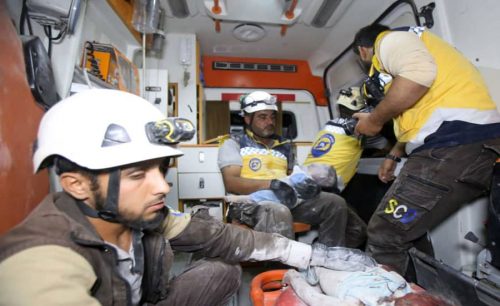 The Britain-based monitor said it was not clear if the aircraft belonged to Russia or the Syrian regime, both of which have pounded Idlib with heavy airstrikes since late April. Turkey’s state-run Anadolu news agency said the post itself was not hit. The raids near Sheir Maghar came after Syrian government forces surrounded another Turkish observation post in the nearby town of Morek last week, according to the Observatory, which relies on sources inside Syria for its information. Days earlier, a regime airstrike cut off a Turkish military convoy shortly after it crossed into Idlib. Turkish President Recep Tayyip Erdogan on Tuesday said that the situation in Idlib had put his troops “in danger.” “We do not want this to continue. All necessary steps will be taken here as needed,” he said after talks with his Russian counterpart Vladmir Putin in Moscow. Idlib province and parts of neighboring Aleppo and Latakia are controlled by Hayat Tahrir al-Sham, a jihadi alliance led by Syria’s former al-Qaida affiliate. Russian-backed Syrian government forces launched a ground offensive against the region on the Turkish border on Aug. 8 after months of heavy bombardment. The fighting has upped the stakes with Ankara, which has established 12 military observation posts in Idlib under the September 2018 buffer zone deal. Increased bombardment by the Syrian military and Russia since late April has killed more than 950 civilians in Idlib. In the same period, the violence has displaced more than 400,000 people including many already uprooted from other areas, the United Nations says. “The situation in the Idlib de-escalation zone is of serious concern to us and our Turkish partners,” Putin said Tuesday at a press conference with Erdogan. He said Turkey had “legitimate interests” to protect on its southern borders and supported the creation of a security zone in the area. Putin said he and Erdogan had agreed “additional joint steps” to “normalize” the situation in Idlib, but did not provide details. The Syrian civil war has killed more than 370,000 people and displaced millions since starting in 2011 with the brutal repression of anti-government protests. SOURCE: AFP