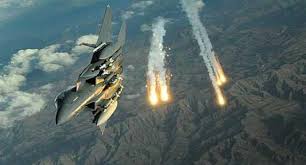 RAWALPINDI (92 News) – At least 31 terrorists have been killed in aerial strikes in Datta Khel area of North Waziristan. According to a statement issued by the ISPR, the strikes were carried out close to the Datta Khel area of the North Waziristan tribal region, the main bastion of militants who rose up against the state in 2004, killing at least 25 terrorists. Several terrorist hideouts were also destroyed in the strikes.