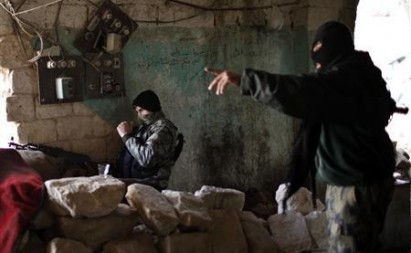 ISTANBUL/BEIRUT - Al Qaeda's official Syrian wing, the Nusra Front, kidnapped 300 Kurdish men in the country's north, a Kurdish official in Syria said on Monday. Idris Nassan, an official in the Kobani canton, said the men were taken on Sunday evening as they were traveling from the town of Afrin, which is under Kurdish control, to the cities of Aleppo and the capital Damascus. "They left women and children but they kidnapped 300 men and young people," he said. "They captured them in Tuqad village, 20 km (12 miles) west of Aleppo and then they moved them to al-Dana town in Idlib province," he said. The Nusra Front was part of an alliance of militant groups that captured Idlib city last month. Nawaf Khalil, a spokesman for the Kurdish PYD party in Europe, confirmed that around 300 had been taken but said he did not know which group had taken them. "They were traveling in buses and stopped at a checkpoint. They are civilians. None of them are fighters," he told Reuters by phone from Germany. The Nusra Front has not claimed the kidnapping. Syrian state media did not report the incident. The Syrian Observatory for Human Rights monitoring group, which tracks the conflict from Britain, said Kurds were kidnapped but it was not clear how many. Kurdish militia and Islamist militants have fought over territorial disputes in Syria during the four-year-long civil war. Some hardline Syrian Islamist militants consider Kurds heretics. The Observatory also reported on Monday that insurgents from Jaish al-Mujahideen had traded 25 kidnapped women and children in exchange for one of their commanders. - Reuters