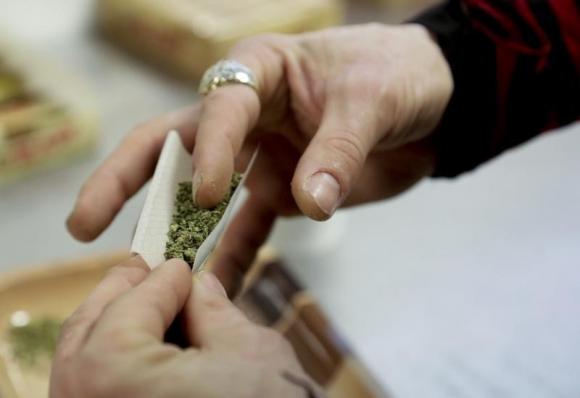 JUNEAU, ALASKA (Reuters) - Smoking, growing and owning small amounts of marijuana became legal in Alaska on Tuesday, as a growing decriminalization movement reached the United States' wild northwest frontier. The Republican-leaning state, which narrowly passed the measure in November, followed Colorado and Washington states in allowing recreational use, reflecting a rapidly shifting legal landscape for the drug, which remains illegal under federal law. Anyone aged 21 or older can now possess up to an ounce of marijuana in Alaska and can grow up to six marijuana plants, three of which can be flowering. Smoking in public and buying and selling the drug remains illegal -- though private exchanges are allowed if money is not involved. President Barack Obama's Justice Department has cautiously allowed the experiments to proceed, saying it would look to prosecute a narrower range of marijuana-related crimes, such as sales to children. But that could change if a more conservative president is elected in 2016, when Alaska's first pot shops are likely to open. Supporters of the measure say it reflects a sense of personal freedom that resonates with residents in Alaska, a state with a libertarian streak. They also argue that legal sales will generate income and jobs. "Alaska now has some of the most sensible marijuana laws in the nation," said Dr. Tim Hinterberger, chair of the Campaign to Regulate Marijuana Like Alcohol in a statement. Alaskan officials, and the state's alcohol regulatory board, which is set to meet on Tuesday, still have to fill a number of gaps in the legislation -- for example a definition of the public places where people can not light up. State regulators are still drafting rules covering the taxation and sale of marijuana, which must be adopted by Nov. 24. Applications for the first business licenses will not be accepted until February 2016. Police have released regular updates on how they will enforce the law. "Ultimately the concern of the police department is the safety and health of our public," Anchorage police spokeswoman Jennifer Castro said. "We want to make sure that people are not operating their vehicle impaired or under the influence of marijuana." In November, voters in Oregon approved a similar measure, though the drug only becomes legal in July, and a ballot initiative legalizing marijuana possession but not retail sales was overwhelmingly approved in Washington D.C.