Aleppo evacuation plan said to be back on track 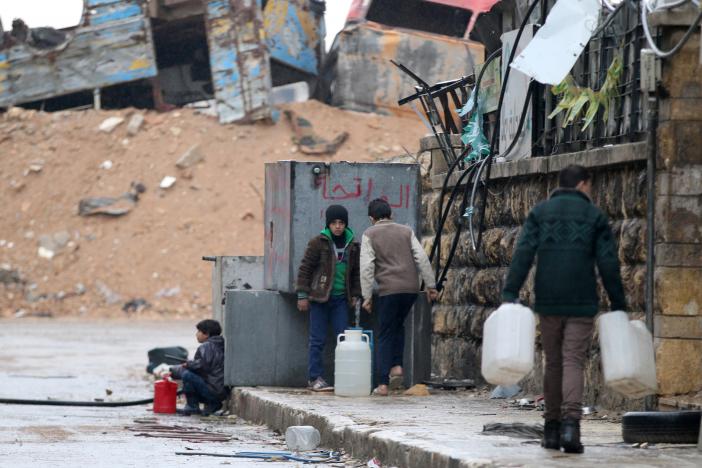 Aleppo evacuation plan said to be back on track

ALEPPO - An evacuation of rebel-held areas of Aleppo was back on track on Thursday despite clashes overnight and was expected to begin "within hours", Syrian opposition groups and a military media unit run by the government's ally Hezbollah said. A Syrian official source told Reuters early on Thursday that the operation to organise the departure of fighters from east Aleppo had begun and the International Committee of the Red Cross said it had been asked to assist with the evacuation. Overnight contacts between the parties succeeded in reviving a ceasefire that had originally come into effect late on Tuesday before breaking down, Hezbollah's media unit said. An official from the Jabha Shamiya rebel group said the new truce came into effect at 2.30am (0030GMT) on Thursday and a Reuters reporter in Aleppo said no fighting had been heard in the city since the early hours of the morning. Such an exodus would end years of fighting for the city and mark a major victory for Syrian President Bashar al-Assad. An initial deal stalled on Wednesday, the planned evacuation failed to materialise and renewed fighting raged in the city. Iran, one of Assad's main backers, had imposed new conditions, saying it wanted the simultaneous evacuation of wounded from two villages besieged by rebels, according to rebel and UN sources. Rebel officials said late on Wednesday that they had agreed to an evacuation of the wounded from those Shi'ite villages in Idlib province, and that the Aleppo deal would go ahead as planned. "Within the coming hours its implementation will begin," said Abdul Salam Abdul Razak, a military spokesman for the Nour al-Din al Zinki rebel group. BIG COMPLICATIONS It was not immediately clear how a deal had been reached, and late on Wednesday it was thrown into doubt by the military media unit run by Hezbollah, an armed Shi'ite group backed by Iran and an ally of the Damascus government. "The negotiations are seeing big complications, in light of tension and operations on the front lines," it said. Fighting had raged in the night on the southern outskirts of Aleppo, where rebel groups outside the city clashed with pro-government forces. The original ceasefire was brokered by Russia, Assad's most powerful ally, and opposition backer Turkey on Tuesday. But the planned evacuation of rebel-held areas did not happen and instead shelling and gunfire erupted in the city on Wednesday, with Turkey accusing government forces of breaking the truce. The UN High Commissioner for Human Rights, Zeid Ra'ad al Hussein, said the bombardment by Syrian government forces and their allies "most likely constitutes war crimes". Turkish President Tayyip Erdogan and Russian leader Vladimir Putin agreed in a phone call on Wednesday to make a joint effort to start the process, Turkish presidential sources said. Shortly before the new deal was announced, clashes raged in Aleppo. Government forces made a new advance in Sukkari - one of a handful of districts still held by rebels - and brought half of the neighbourhood under their control, according to the Syrian Observatory for Human Rights, a monitoring group. Rebels said they attacked government forces with suicide car bombs. The Russian defence ministry said - before the report of the government forces' advance in Sukkari - that the rebels controlled an enclave of only 2.5 square km (1 square mile). RAPID ADVANCES The evacuation plan was the culmination of two weeks of rapid advances by the Syrian army and its allies that drove insurgents back into an ever-smaller pocket of the city under intense air strikes and artillery fire. By taking control of Aleppo, Assad has proved the power of his military coalition, aided by Russia's air force and an array of Shi'ite militias from across the region. Rebels have been supported by the United States, Turkey and Gulf monarchies, but that support has fallen far short of the direct military backing given to Assad by Russia and Iran. Russia's decision to deploy its air force to Syria 18 months ago turned the war in Assad's favour after rebel advances across western Syria. In addition to Aleppo, he has won back insurgent strongholds near Damascus this year. The government and its allies have focused the bulk of their firepower on fighting rebels in western Syria rather than Islamic State, which this week managed to take back the ancient city of Palmyra, once again illustrating the challenge Assad faces reestablishing control over all Syria. -Reuters