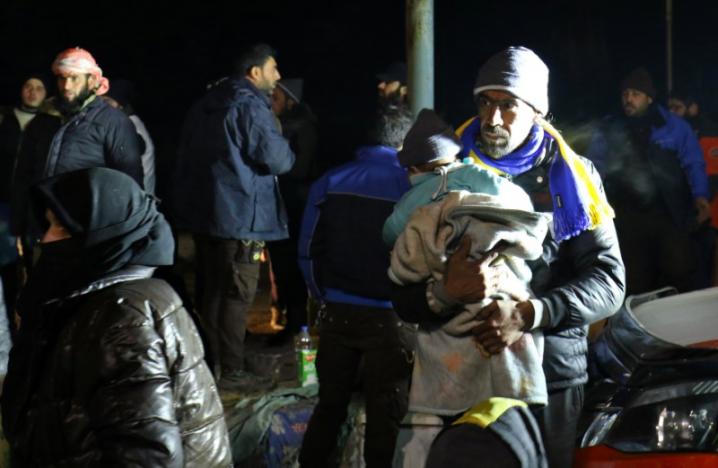 BEIRUT - Convoys of evacuees travelled from a rebel-held area of Aleppo and from two Shia villages besieged by insurgents on Monday after a days-long stand-off. Dozens of buses carrying thousands of people from Aleppo's tiny rebel zone reached insurgent areas of countryside to the west of the city, according to a United Nations official and the Syrian Observatory for Human Rights, a monitoring group. At the same time, 10 buses left the Shia Muslim villages of al-Foua and Kefraya, north of Idlib, for government lines in Aleppo, the sources said. The evacuation of civilians, including wounded people, from the two villages which have been besieged by rebels for years, was a condition for the Syrian army and its allies to allow thousands of fighters and civilians trapped in Aleppo to depart. "First limited evacuations, finally, tonight from east Aleppo and Foua & Kefraya. Many thousands more are waiting to be evacuated soon," Jan Egeland, who chairs the United Nations aid task force in Syria, tweeted late on Sunday night. Syrian state TV and pro-Damascus stations showed the first four buses arriving in Aleppo from the besieged villages, accompanied by pick-up trucks and with people sitting on their roofs. Later on Monday, the Security Council will vote in New York on a resolution to allow U.N. staff to monitor the evacuations. The draft resolution was the result of a compromise between Russia and France, and the United States said it was expected to pass unanimously. On Sunday, some of the buses sent to al-Foua and Kefraya to carry evacuees out were attacked and torched by armed men, who shouted "God is greatest" and brandished their weapons in front of the burning vehicles, according to a video posted online. That incident threatened to derail the evacuations, the result of intense negotiations between Russia - the main supporter of Syrian President Bashar al-Assad - and Turkey, which backs some large rebel groups. At stake is the fate of thousands of people still stuck in the last rebel bastion in Aleppo after a series of sudden advances by the Syrian army and allied Shi'ite militias under an intense bombardment that pulverised large sections of the city. They have been waiting for the chance to leave Aleppo since the ceasefire and evacuation deal was agreed late last Tuesday, but have struggled to do so during days of hold-ups. The weather in Aleppo has been wet and very cold and there is little shelter and few services in the tiny rebel zone. 'THEY JUST WANT TO ESCAPE' Assad is backed in the war by Russian air power and Shi'ite militias including Lebanon's Hezbollah movement and Iraq's Harakat al-Nujaba. The mostly Sunni rebels include groups supported by Turkey, the United States and Gulf monarchies. In the square in Aleppo's Sukari district, organizers gave every family a number to allow them access to buses. "Everyone is waiting until they are evacuated. They just want to escape," said Salah al Attar, a former teacher with his five children, wife and mother. Thousands of people were evacuated on Thursday, the first to leave under the ceasefire deal that ends fighting in the city where violence erupted in 2012, a year after the start of conflict in other parts of Syria. They were taken to rebel-held districts of the countryside west of Aleppo. Turkey has said Aleppo evacuees could also be housed in a camp to be constructed in Syria near the Turkish border to the north. For four years the city was split between a rebel-held eastern sector and the government-held western districts. During the summer, the army and its allies managed to besiege the rebel sector before using intense bombardment and ground assaults to retake it in recent months. A Reuters reporter who visited recaptured districts of Aleppo in recent days saw large swathes reduced to ruins, with rubble and other debris clogging the streets and sections of the famous Old City all but destroyed. -Reuters