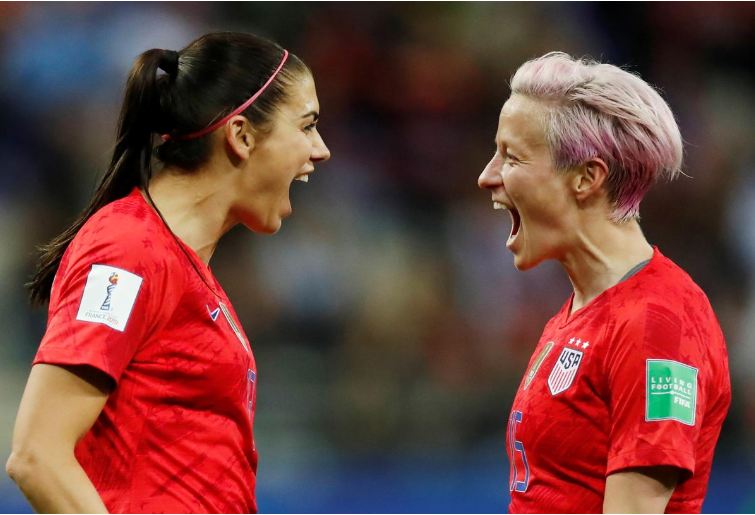 REIMS, France (Reuters) - Striker Alex Morgan scored five times as holders the United States began their World Cup campaign with a record 13-0 win over Thailand on Tuesday. The Group F result was the largest margin of victory in either the men’s or women’s World Cup. When the Americans headed for the interval 3-0 up, there was little indication of what was to come in the second half. After netting four times in six minutes shortly after the restart, they then added six more goals in the last 16 minutes. Morgan opened the goal spree for the title favourites, who are in pursuit of a fourth world crown, with a header in the 12th minute and from then on there was no stopping the champions. Eight minutes later Rose Lavelle found the net with a left-footed shot while midfielder Lindsey Horan gave them a 3-0 halftime lead. Samantha Mewis opened the floodgates five minutes after the break as the U.S. made life miserable for the Thais by regularly finding the back of the net. In total seven Americans scored during the match - Morgan (5), Lavelle (2), Mewis (2), Horan, Megan Rapinoe, Mallory Pugh and Carli Lloyd all finding their way on to the scoresheet in a performance that is bound to strike fear into all of those teams hoping to end the United States’ reign as world champions. “We really wanted to showcase ourselves and what we’ve been preparing for and working on and I think we did that,” said Morgan. “Every goal matters in this tournament and so that’s what we were working on in this game. We got a lot of attacks and I think we were really clinical in the number of attacks that we did get. “I am speechless. The ball just bounced my way today and I am looking forward to the next game. “To see Rose Lavalle have the confidence to go at players, Sam Mewis taking on players and scoring from outside the box... I am really proud of them.” The result surpassed Germany’s 11-0 win over Argentina in 2007 and almost doubled the US own previous record - a 7-0 success over Taiwan in 1991. “We did not do enough. They were excellent all around. We don’t have any excuse and accept they are better,” said Thailand coach Nuengrutai Srathongvian.