SRINAGAR (News) – All Parties Hurriyat Conference (APHC) Chairman Syed Ali Geelani has demanded Prime Minister Imran Khan to make an announcement of Pakistan’s withdrawal from all aspects of the Tashkent, Shimla and Lahore agreements. In a letter penned to PM Imran Khan, the APHC chairman thanked the prime minister and the people of Pakistan for their whole-hearted support to the Kashmir cause and sacrifices for the oppressed people of Indian Occupied Kashmir (IoK). Syed Ali Geelani admired the way the prime minister spoke at the United Nations General Assembly (UNGA) in favor of the Kashmiri people and against the Indian decision to illegally change the disputed status of Jammu and Kashmir. He pointed out that India’s attempt to force this illegal decision on the people has seen a widespread curfew in the region. Syed Ali Gilani maintained that the freedom struggle of the Kashmiri people against the Indian occupation and tyranny has gone through many phases since 1947 and the years, 1988, 2008, 2010 and 2016, have remained as landmarks of the struggle. “All forms of communication, including phones and internet have been cut off. Thousands of people, including children, old men, teenagers, traders, lawyers, students and Hurriyat leadership and their relatives have been subjected to savage torture,” Syed Ali Geelani said. “The mass blinding of Kashmiri youth, which started in 2010 has also continued with hundreds more being injured by pellet guns in this phase of the struggle as well,” he added. The APHC chairman pointed out that molestation, sexual harassment and even sodomy have also continued to be used as state policy to subjugate people. “Indian occupation forces are still molesting women after barging into their homes. Parents are being asked the ages of their young girls and the occupying forces are telling people that their intention is to dishonor Kashmiri Muslim women,” he added. “Many people have been threatened that they will be thrown out of their homes and notices are being issued that peoples’ houses will be taken over. It is noteworthy that the Muslims of Ladakh have also been left at the mercy of brutal Indian forces, as the people of that region are also opposing this illegal Indian action,” he maintained. The APHC chairman has demanded PM Imran Khan to make an announcement of Pakistan’s withdrawal from all aspects of the Tashkent, Shimla and Lahore agreements as India has unilaterally brought these agreements to an end. He has also urged the PM to re-designate the Line of Control (LoC) as the Ceasefire Line since India has taken the situation back to the status as existed in 1947-48. Syed Ali Gilani has pointed out that Pakistan should take all measures at the UN and with the international community to give the people of Jammu and Kashmir their promised right to self-determination. Syed Ali Gilani added if India continues to refuse this demand Pakistan should press for sanctions against India. The Text of Syed Ali Gilani’s letter is here: 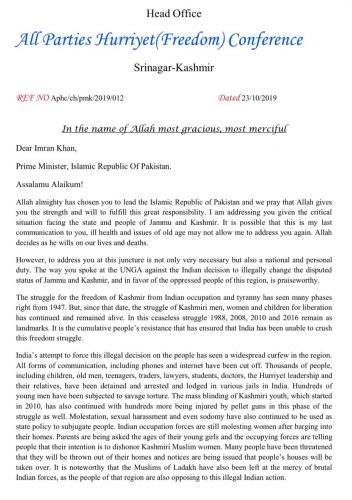 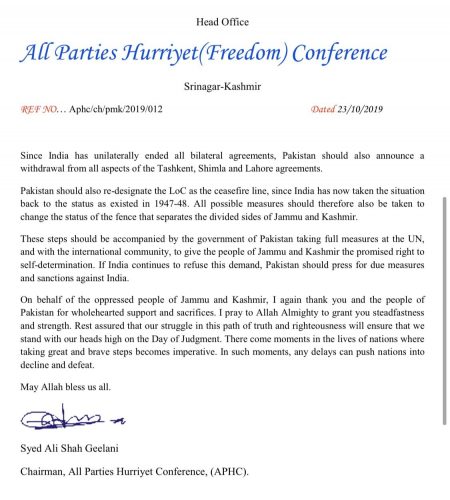