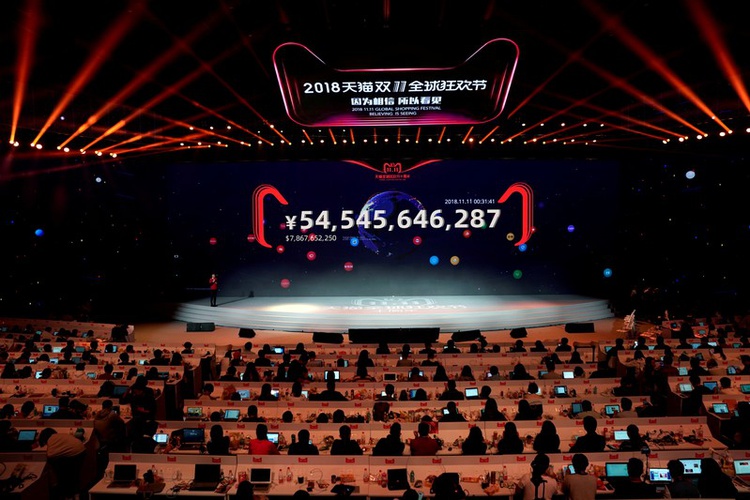 SHANGHAI (Reuters) - Chinese e-commerce giant Alibaba Group Holding Ltd settled roughly 69 billion yuan ($9.92 billion) in the first hour of its annual Singles’ Day on Sunday, up roughly 21 percent from last year’s early haul of 57 billion yuan. Singles’ Day is the world’s biggest online sales event and last year netted Alibaba 168 billion yuan ($24.15 billion) in total sales. A disproportionately large number of sales are recorded in the first minutes of the 24-hour spending spree, when transactions are recorded for items that have been put on hold. Alibaba kicks off the annual event with a gala, which this year featured US singer Mariah Carey, a Japanese Beyonce impersonator and a shoe-shopping-themed Cirque du Soleil performance. It’s expected to be the company’s final November sale event with founder and chairman Jack Ma at the helm. Current chief executive Daniel Zhang will take over as chairman next year, the company said in September. While sales growth remains steady, Alibaba’s stock has dropped 16 percent this year amid economic uncertainties linked to brewing trade tensions between China and the United States. Earlier this month, Alibaba revised down its full-year revenue forecast, sending a chill through investors, as it said sales of big-ticket items would be impacted. To compensate, the company will take in less income from its platforms in the near term in order to retain brands and new buyers, it said. This year, Alibaba said there were around 180,000 brands participating in Singles’ Day, and as of 10 a.m. on Sunday sales were close to $20 billion.