All eyes on Shakib as Bangladesh face Australia in World Cup 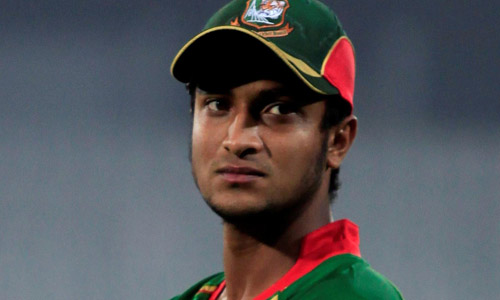 All eyes on Shakib as Bangladesh face Australia in World Cup

BRISBANE (Reuters) – Bangladesh pin all hopes on talisman Shakib as it faces Australia in the World Cup match at the Brisbane Cricket Ground on Saturday. A Bangladesh cricketer leading any individual world ranking is an achievement in itself but Shakib Al Hasan has raised the bar considerably by topping the all-rounder's charts in all three formats. While a few might argue whether the 27-year-old is indeed currently the world's best all-rounder, there is not an iota of doubt that Shakib is the best cricketer Bangladesh has ever produced. The attacking middle-order batsman became the first from his country to cross 4,000 runs in one-day internationals on Wednesday and is fourth on the list of test runs, boasting an average better than the three ahead of him. Made captain at the age of 22, he also sits top of the list in test wickets with his left-arm spin and third in ODIs, again with a better average than the two men ahead of him. The kind of celebrity Shakib enjoys in Bangladesh can perhaps only be matched by top cricketers in neighbouring India. He can't risk going out for a lazy stroll on the densely-populated streets of Dhaka, the capital of the world's eighth most populous country. "I don't go to any of the shopping malls -- I can't go there. I go to a few of the restaurants, but selected ones. I don't go out much," Shakib, whose wedding was broadcast live in Bangladesh in 2013, told the Cricket Australia website last month during the Big Bash League. In November, he joined Imran Khan and Ian Botham as the only men to take 10 wickets and score a century in the same test match when he achieved the feat against Zimbabwe at home. Runs and wickets also flowed in the five-match ODI series following the tests and the result was his elevation to the top of the all-rounders' rankings in all three formats in January. Critics blame Shakib for a lack of control over his temper and say his achievements and stardom have gone to his head. The start of 2014 saw him banned by the Bangladesh Cricket Board for three matches for making an indecent gesture during the live telecast of a match. Later in the year he was handed a six-month ban for a 'severe attitude problem' and told he would not be allowed to play in overseas competitions until the end of 2015. Shakib was accused of travelling to the Caribbean to play a Twenty20 tournament without clearance from his board and had an altercation with coach Chandika Hathurusinghe. Local media reported that he threatened to quit playing for the country over the dispute. The ban was lifted after two months, however, allowing his return for the home series against Zimbabwe. Shakib is well aware that the World Cup is the perfect stage to resurrect his image and make a mark. "The World Cup is perfect," he said. "To perform on the big stage is a great opportunity." He has started well with a 63 under pressure and two wickets against Afghanistan in their World Cup opener and coach Hathurusinghe knows the worth of his all-rounder. "We have the number one all-rounder in all formats. I am expecting (Shakib) to perform and take a lead role," the former Sri Lanka cricketer said. "He's an explosive batter who can get in and control the game. He is a very clever bowler." AUSTRALIA: Squad: Michael Clarke (captain), George Bailey, Aaron Finch, Steve Smith, David Warner, Shane Watson, Pat Cummins, Xavier Doherty, James Faulkner, Brad Haddin, Mitchell Starc, Josh Hazlewood, Mitchell Johnson, Glenn Maxwell, Mitchell Marsh Results so far at 2015 World Cup: Beat England by 111 runs. Top performers: Aaron Finch (135 runs); Mitchell Marsh (5 wickets); Steve Smith (2 catches). BANGLADESH: Mashrafe Mortaza (captain), Anamul Haq, Tamim Iqbal, Mahmudullah, Arafat Sunny, Mominul Haq, Mushfiqur Rahim, Shakib-Al Hasan, Nasir Hossain, Rubel Hossain, Sabbir Rahman, Soumya Sarkar, Taskin Ahmed, Taijul Islam, Al-Amin Hossain Results so far at 2015 World Cup: Beat Afghanistan by 105 runs Top performers: Mushfiqur Rahim (71 runs); Mashrafe Mortaza (3 wickets); Sabbir Rahman, Soumya Sarkar, Mashrafe Mortaza, Rubel Hossain, Anamul Haq, Mahmudullah (1 catch each) Australia v Bangladesh head to head: Total played: 19 Australia won 18, Bangladesh won 1. Last match: Apr 13, 2011 – Australia beat Bangladesh by 66 runs at Dhaka.