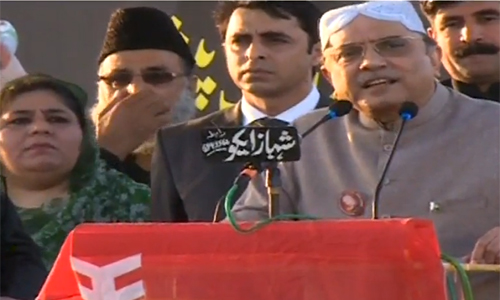 NAUDERO (92 News) – Pakistan People’s Party (PPP) co-chairman Asif Ali Zardari has said that all Pakistanis are ready to sacrifice their lives for Haramain Sharifain Addressing the 36th death anniversary of PPP founder Zulfikar Ali Bhutto in Naudero on Saturday, Asif Ali Zardari congratulated PTI chairman Imran Khan on the formation of the judicial commission. He added that effort is being made to pitch the Muslim world against each other. “The border of any Muslim country should not be damaged.” He said: “Imran Khan should return to parliament and play his role along with us in making the Election Commission of Pakistan (ECP) independent.” The PPP co-chairman said that he is not consulted for the betterment of the country and four provinces should make decisions instead of a single person. “Nawaz Sharif left for abroad after leaving me in jail. But I will be with Nawaz Sharif in every difficult time,” he maintained. Zardari said: “Benazir Bhutto had written her last book for the Muslim Ummah and said that blood will be shed in the Himalaya after her. It can be witnessed that canals of blood are being shed in Pakistan and Afghanistan.” The PPP co-chairman said that he is a complaint with the government for 18-hour power shutdown in Sindh. “We will not let the system weak. The PPP bore lashes, but no one wrote an apology. We will be with Mian Sahib if such situation emerged,” he said. Sindh Chief Minister Syed Qaim Ali Shah, former prime minister Raja Pervaiz Ashraf, Aitzaz Ahsan and Sherry Rehman also addressed the ceremony. Meanwhile, ceremonies were also held in Peshawar and Mardan.