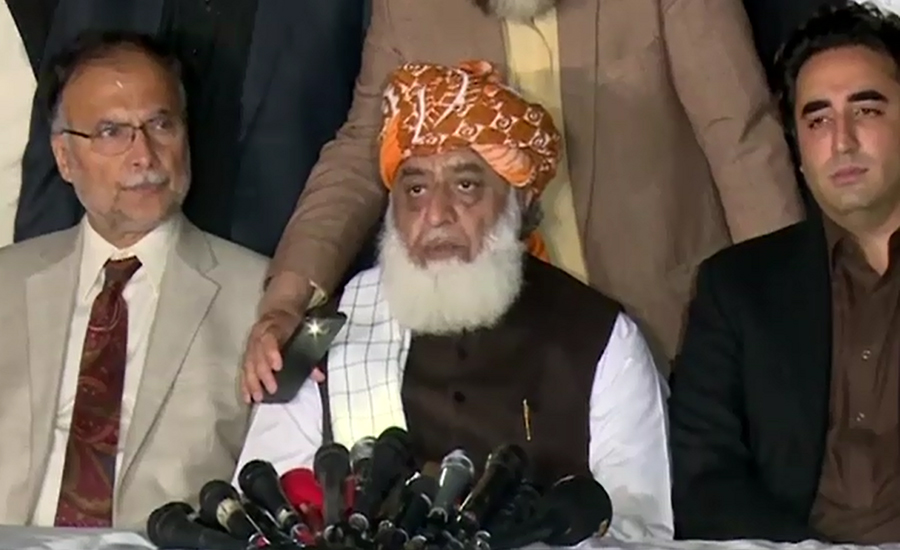 ISLAMABAD (92 News) – JUI-F chief Maulana Fazlur Rehman said all parties are agreed that the selected prime minister cannot be accepted. Talking to the media after the all parties conference (APC) on Tuesday, he said that the new elections are their final demand and there can be no compromise on it. He said that the incompetent rulers had made the sensitive postings controversial. The JUI-F said that impartial elections and an end to the government are the solution to political and constitutional crisis. “All parties of the opposition are one page against the government,” he said. He declared that they were in the field if the rulers did not resign. PPP chairman Bilawal Bhutto has also demanded afresh elections in the country. “We neither accept the present selected nor do will accept the selected. We will definitely make a public prime minister,” he said. He said that Asif Zardari unwell for sometimes and the government is not cooperating with regard to his health. “We demand that Asif Zardari should be provided the facility of personal physician. The government is not ready to accept our demand,” he said. PML-N leader Ahsan Iqbal said that 15-month selection of Imran Khan had created dangers for the country. He said that the extension in the service tenure of the sensitive institution had been made a joke. “Only transparent elections are the solution to all problems,” he said. He said that the system was being run through ordinances by locking the parliament.