All to play for as Bangladesh, Windies clash in tour finale

All to play for as Bangladesh, Windies clash in tour finale

DUBAI (92 News) - It will be all to play for as Bangladesh and the Windies clash in the final of the three-match Twenty20 International series currently tied at 1-1, which also marks the end of the tour.

After being dominated in the first match, Bangladesh came back strong to register a 36-run win in the second T20I in Mirpur, courtesy of a good show by the batsmen, who took the team to an imposing total of 211/4. Liton Das (60 off 24), captain Shakib Al Hasan (42 off 26) and Mahmudullah (43 off 21) all starred as Bangladesh adopted an aggressive approach right from the onset and seldom allowed the run rate to drop below 10 an over. In reply, despite a valiant 34-ball 50 from Rovman Powell, the visitors could not bear the pressure of a high score and perished inside 20 overs for 175 runs. Shai Hope (36 off 19) and Keemo Paul (29 off 16) were other key contributors but those contributions weren't enough. For Bangladesh, their captain led from the front, first with the bat, hitting five fours and a six and then with the ball, picking up 5/21 to cripple the Windies batting line-up. Mehidy Hasan, Mahmudullah and Abu Haider returned a wicket each while Mustafizur Rahman got two. It was a marked improvement from the first T20I for Bangladesh, where they were folded for a paltry 129 and the Windies chased it down in just 10.5 overs. The batsmen made the bowlers' job easier by putting up a 200-plus score and forcing the Windies to attack from ball one, a plan that didn't quite work out. For the Windies, their bowling needs to get back on track. Three of the five bowlers used conceded in excess of 10 runs per over while one went at 9.5 an over. Only Fabian Allen (4-0-29-1) returned with economical figures. 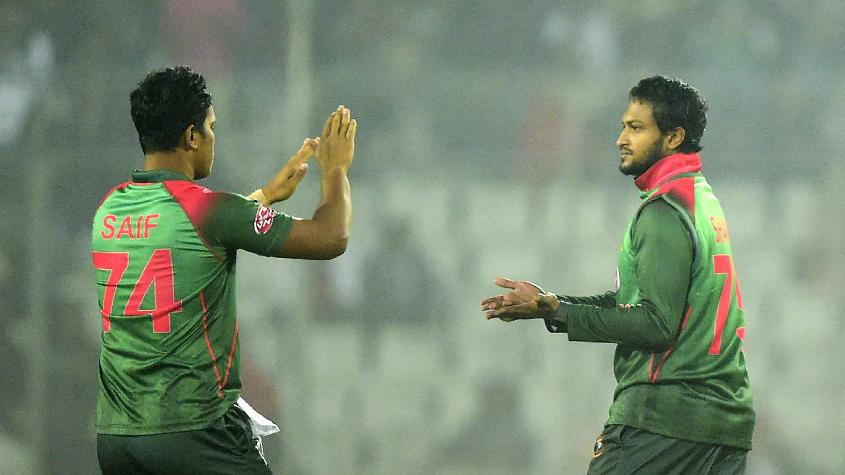 Shakib Al Hasan scored a fifty and bagged five wickets in the second T20I
Key players Shakib Al Hasan (Bangladesh): The Bangladesh captain put in a match-winning performance in the second match, becoming the first player to score more than 30 and take five wickets in the same T20I. He would hope to do the same int the decider. Shai Hope (Windies): Hope has led the Windies' hopes throughout the limited-overs leg of the tour and chipped in with a cameo in a losing cause. With form on his side, he may be expected to do the damage at the top of the order. Conditions A warm day is expected in Dhaka, although it's likely to cool down to 15 degrees at night. The pitch may not change it's nature within the span of two days and another high-scoring affair may be expected. As it is, the ball is expected to move around a bit under lights and so the team winning the toss may be tempted to bat first. Squads Bangladesh: Shakib Al Hasan (c), Tamim Iqbal, Soumya Sarkar, Liton Das, Mushfiqur Rahim, Mahmudullah, Rubel Hossain, Mehidy Hasan, Nazmul Islam, Mohammad Mithun, Mohammad Saifuddin, Abu Hider Rony, Ariful Haque, Mustafizur Rahman Windies: Carlos Brathwaite (c), Darren Bravo, Shimron Hetmyer, Fabian Allen, Kesrick Williams, Keemo Paul, Khary Pierre, Evin Lewis, Nicholas Pooran, Rovman Powell, Denesh Ramdin, Shai Hope, Sherfane Rutherford, Sheldon Cottrell, Oshane Thomas