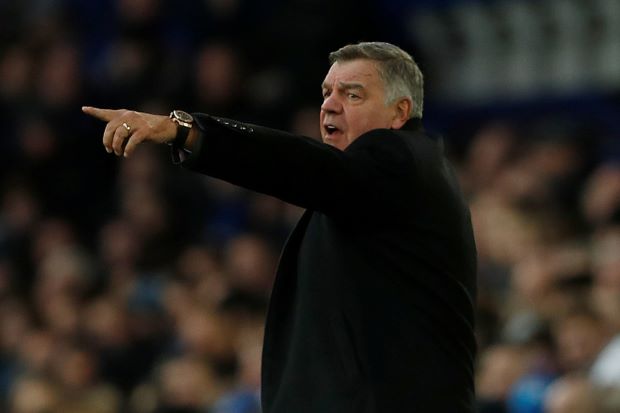 LONDON (Reuters) - The Sam Allardyce effect that Premier League clubs invariably covet in their hour of need was instantly in evidence at Everton on Saturday -- and ‘Big Sam’ was in bullish mood after celebrating a successful start to his latest salvage operation.

The former England manager, who came out of retirement for the job at one of England’s most famous clubs, sounded full of vim and vigour -- and rather younger than his 63 years suggested -- after watching his new charges beat Huddersfield Town 2-0.

“It took me six games at my previous job at Crystal Palace to get my first win and everybody was telling everybody else I’d come back too soon, that I wasn’t the man I used to be,” smiled Allardyce.

“If I take a job I‘m totally, fully, committed and I don’t take the job in any other circumstances. I turned many a job down before this one. I felt this one was right for me. It’s a dream job for me and I’ll give it 100 percent.”

No wonder he could afford to feel so upbeat after a week which had started amid talk of another potential relegation battle but had ended with Everton moving into the top half of the table into 10th place after Saturday’s win.

Allardyce, who has never been shy in trumpeting his own qualities, was quick to take some credit for the win, which came with second-half goals from Gylfi Sigurdsson and Dominic Calvert-Lewin after Everton had been very poor for 45 minutes.

“I had some work to do tactically at halftime, mainly on Sigurdsson and (Aaron) Lennon not running too far back. I have to say, it got us the first goal,” Allardyce said.

“Sigurdsson was further up the pitch than he would have been. It was something we really needed.”

Back in management for the first time since May when he left Crystal Palace, having taken them from the relegation zone to 14th, Allardyce was left convinced by this opening success that he has inherited a squad with the right attitude for a scrap.

“Getting a win in your first game after a fantastic win on Wednesday night (the 4-0 win over Allardyce’s former club, West Ham United) and back-to-back league wins for the first time this season. Let’s hope it’s onwards and upwards, boys,” he said. “I’ve learned the squad can dig in and be resilient already. They know they let too many goals in before I got here and that has to stop. We can build on the attacking play more once we have established that solid defensive unit.”