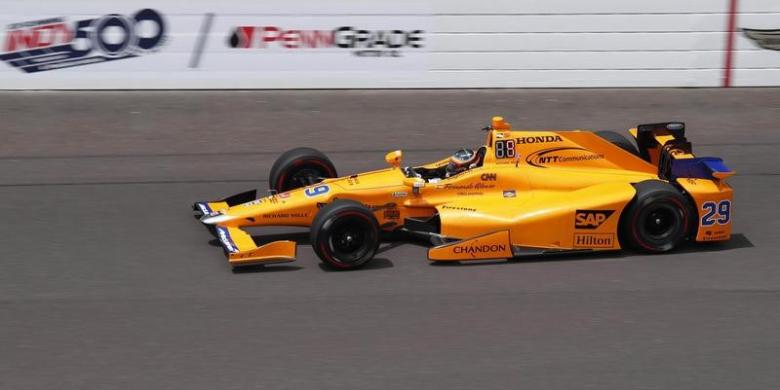 INDIANAPOLIS – Frenchman Sebastien Bourdais posted the top speed while IndyCar rookie Fernando Alonso fired a warning shot on the final day of practise before qualifying for the Indianapolis 500 on Saturday.

Bourdais, who spent parts of two seasons in Formula One with Toro Rosso, posted the fastest lap of 233.116 mph (375.164 kph)around the famed 2.5 mile super speedway on what is known as 'Fast Friday'.

Qualifying is on Saturday with 33 spots on the starting grid for the May 28th race up for grabs. The fastest nine cars will battle for pole on Sunday.

"Never a bad day when you're at the front," smiled Bourdais. "It's pretty exciting just to be in the mix knowing that we seemingly have a chance to do well in qualifying.

Japan's Takuma Sato was third quickest with a 231.969 mph and Alonso fourth best with 231.827 mph in his McLaren Andretti Autosport Honda.

It was a particularly impressive performance from the Spaniard given the two time Formula One champion had never driven an IndyCar before this week with the exception of one brief test earlier in May.

The effort impressed his Alonso's Andretti Autosport team mate Sato, who also had considerable experience in Formula One with Jordan, BAR and Super Aguri, before making the jump to IndyCar.

"I think it's very impressive," Sato told reporters. "Although, it's what you expected, what we expected, to be honest.

"Fernando is one of the best drivers in the world. I think we expected him to be up to speed very quickly.

"Obviously today is something new for him again. Fast Friday you break 230 miles per hour for the first time. He did drive extremely well."

Alonso has endured a miserable F1 season with McLaren, who have struggled with an unreliable and uncompetitive Honda engine and are the only team on the grid yet to score a point after five races.

Honda, however, have dominated at the Brickyard powering 11 of the top 12 cars on Fast Friday, including the top four. –Reuters