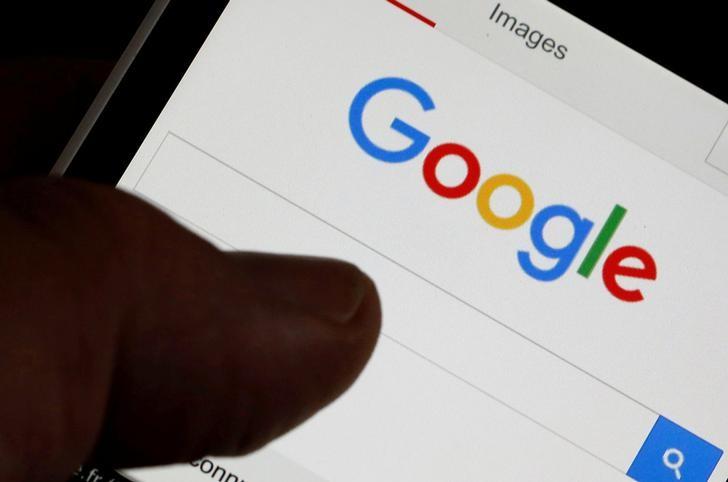 SAN FRANCISCO - Alphabet Inc reported a 21 percent jump in quarterly revenue, maintaining a growth rate that is rarely seen among companies its size and suggesting the big sales gains enjoyed recently by the other Internet firms are not done yet.

Alphabet, the owner of Google and YouTube, said it made $3.5 billion in net income on sales of $26 billion. The profit would have been much larger but for a record $2.7 billion European Union antitrust fine.

Still, the company noted that costs were rising faster than sales and warned that expenses would remain high as more searches shift to mobile devices.

The squeeze on expected future profit appeared to weigh on Alphabet's share price, which fell about 3 percent to $967 after the bell. Shares had closed up in regular trading and have gained 26 percent for the year.

Alphabet's cost of revenue, a measure of how much money the company must spend to keep its platforms running before added costs such as research, rose 28 percent, well above the growth in revenue itself.

The rising costs, including what Google pays to drive traffic to its search engine, hurt operating margins more than most people had expected, said Doug Kass, president of Seabreeze Partners Management. "This could be problematic going forward," Kass said.

Alphabet Chief Financial Officer Ruth Porat, asked about margins during a conference call with analysts, said the company was focused on getting bigger. "As we've often said, we're focused on revenue and operating income dollar growth and not on operating margins," she said.

Increasing costs, Porat added, are a result of more money going into high-growth products that she said would create value for shareholders.

With its latest profits, Alphabet reported $15.7 billion in cash and cash equivalents, and another $79 billion in marketable securities. Alphabet and social media rival Facebook Inc, which together dominate the online ad market, compete for advertising dollars.

This year, Google is expected to have $73.75 billion in net digital ad revenue worldwide while Facebook is expected to take in $36.29 billion, according to research firm eMarketer. Together they will have about 49 percent of the market, eMarketer said.

Facebook is due to report earnings on Wednesday. The technology sector has led a big rally in US stocks. The S&P 500 information technology index is up 23.1 percent this year, compared with a 10.4 percent rise in the S&P 500.

The fine came in the first of three EU probes of Google's dominance in searches and smartphone operating systems, and analysts are going to monitor the downside closely, said Josh Olson, an analyst with Edward Jones.

"It is not so much the money or the fine itself," Olson said, but "questions linger about what impact that could have on Google's Europe business, and they did not really comment on that."

US antitrust enforcers thus far have chosen not to follow Europe's lead.

Sundar Pichai, chief executive officer of Google, said in response to an analyst question during Monday's call that Google would fight to continue bundling its Android operating system with popular smartphone apps such as Google Maps -- a practice the EU antitrust officials are investigating.

"It's a very open market, open ecosystem, and it works well for everyone, and I expect that to continue," Pichai said, adding that billions of people use Google products. Pichai was also appointed to the Alphabet board of directors on Monday. Google's ad revenue rose 18.4 percent to $22.67 billion.

Revenue from other Google products, a category that includes the Pixel smartphone, the Play Store and Google's cloud business, rose 42.3 percent to $3.09 billion. Alphabet competes heavily in the fast-growing cloud business with tech companies Amazon.com Inc and Microsoft Corp.

Losses from other Alphabet units - an array of businesses known as "other bets" that includes the Waymo self-driving car company, thermostat-maker Nest and the life sciences firm Verily - narrowed to $772 million from $855 million a year earlier. -Reuters