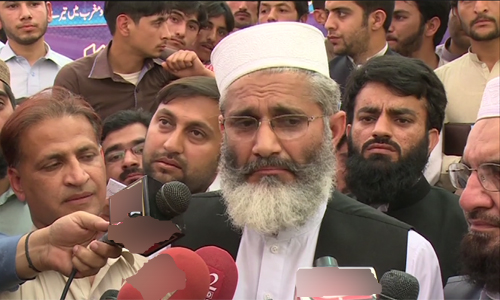 KARACHI (92 News) – Jamaat-e-Islami ameer Sirajul Haq has said that MQM chief Altaf Hussain cannot get the city of the Quaid through extortion. Talking to the media on Saturday, he said that fire was opened on the rally of the Jamaat-e-Islami on Friday. Sirajul Haq said that they will introduce a uniform education system in the country. He asked the ECP to monitor the intra-party elections as well. He said that the nation had given the mandate to the rulers for resolution of their problems. "We have tried our best to promote democracy. The judicial commission has been established due to our efforts." He said that the Jamaat-e-Islami will hold a meeting in Karachi at all costs on Sunday. “The JI’s electioneering in NA-246 by poll is being made the target of bullets and clubs,” he added. The JI ameer asked the Sindh government to take notice of the incident. MQM and JI leaders are criticizing each other after the JI rally was attacked in Liaquatabad on Friday.