KARACHI (92 News) – Muttahida Qaumi Movement (MQM) chief Altaf Hussain has said that their opponents are nervous about the popularity of the MQM. Addressing the workers by phone on Saturday, he said: “Workers should display discipline and they will achieve success.” He said that they will offer sweets, not beating, to the PTI people on April 23. “We will talk about love, brotherhood and shaking of hands,” he said. Altaf said that today’s meeting was so big that even the drone camera could not show it. “Today’s meeting has broken the record of all meetings. I congratulate Kanwar Naveed Jamil in advance.” He said that the PTI is a branch of Taliban, while the Jamaat-e-Islami is a sub-branch of al-Qaeda. “We should neither be considered strangers nor be accused of being foreigners,” he said. The MQM chief said that their elders had created Pakistan after offering sacrifices. He said that SIC leader Tariq Mahboob had died of torture, not of cardiac arrest. He called for starting a new journey of love. “We want to see Pakistan prospering.” Altaf Hussain said that secured return of IDPs should be ensured. He said that Pakistan should summon a meeting of the United Nations over the Kashmir issue. He said that the prime minister should apply ointment on the ‘wounds’ of the Balochs. “We need friends in the region, not foes. We need trade, not a war,” he maintained.

Altaf Hussain said that people should make themselves successful and they would get Pakistan include in the European Union. Earlier, MQM leader Haider Abbas Rizvi said that people had become so prejudiced that they term them ‘black’. “Some people call us as living corpses.” He said that the sun of April 23 would bring a victory for the followers of truth. 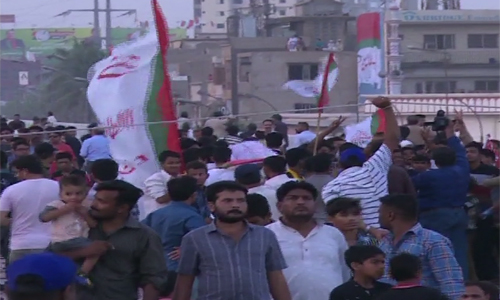