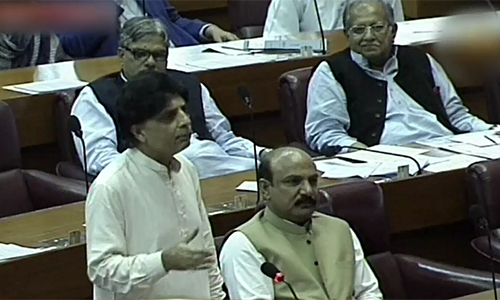 ISLAMABAD (92 News) – Interior Minister Ch Nisar has said that it is the matter of Altaf Hussain’s speeches, not Rangers and Army. Speaking on the floor of the National Assembly on Monday, he said that Altaf’s policies have taken the matter to the extent that it will take time to compensate for the loss. The minister said that the government, parliament and Army were not against the MQM, while the Karachi operation is not against any political party, but criminals. “We are ready to discuss every problem of the MQM. However, it cannot be discussed under the situation created by Altaf Hussain,” he said. Ch Nisar said that Senate Chairman Raza Rabbani had asked him to register the FIR against parliamentarians, but he stopped the DG Rangers to proceed with it till clear-cut proofs. He said that there would be no use of raising the issue of missing persons without proofs. “The figures narrated by the MQM are totally wrong. I am ready to brief the parliament about the raid on the Nine Zero. The recoveries made there should also be held accountable,” the minister said.