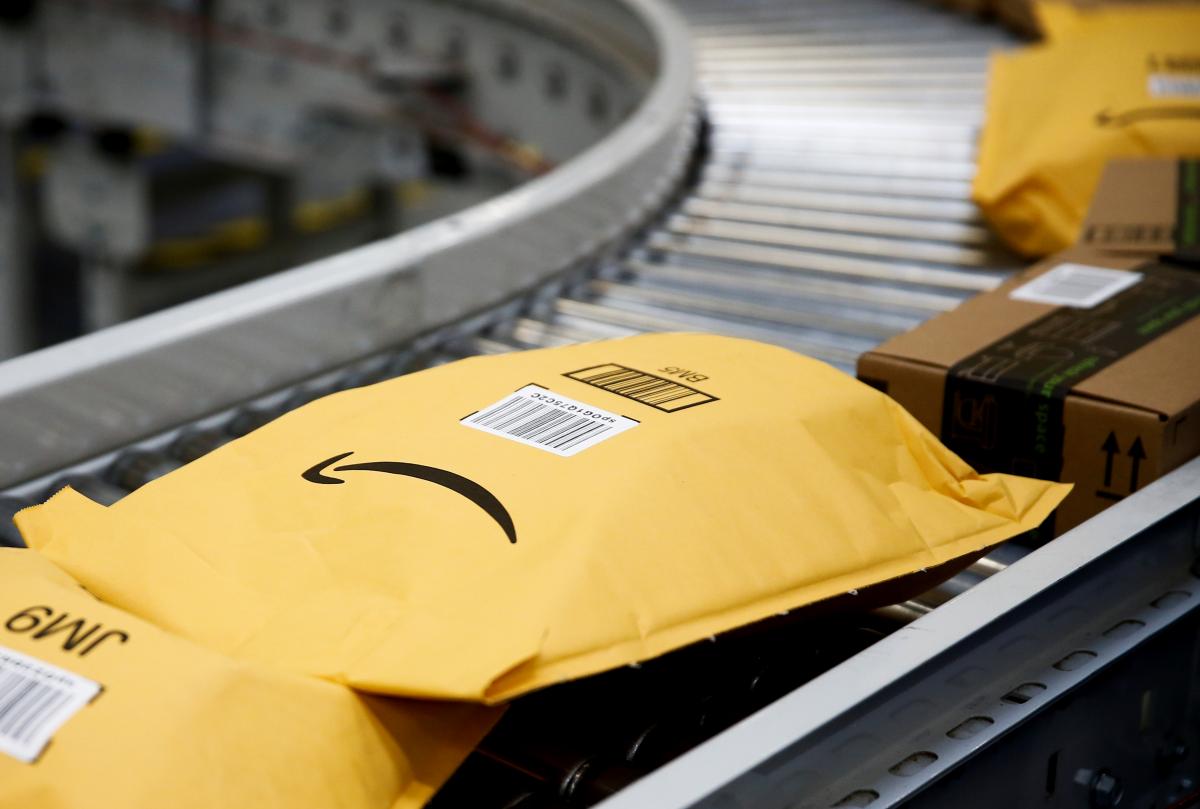 (Reuters) - Amazon.com Inc (AMZN.O) forecast holiday season sales and profit that missed Wall Street targets on Thursday, projecting revenue growth that would be the slowest in years, sending shares of the world’s largest online retailer down 8 percent in after-hours trade.
Amazon’s third-quarter sales lagged estimates as well. Analysts said international results were disappointing and online competition was increasing. The company blamed accounting changes and cautioned that it was being conservative with its outlook. For years, Amazon has made expensive bets on new technology and programs, like its $13.7 billion (£10.7 billion) acquisition of Whole Foods in 2017 to storm the U.S. grocery industry. That has resulted in rollercoaster profits in the past, but revenue has largely grown at a breakneck pace as consumers shifted shopping online and away from brick-and-mortar stores. “Weak revenue growth stuck out like a sore thumb,” said George Salmon, analyst at Hargreaves Lansdown. “And when you’re trading on 70 times expected earnings, it doesn’t take much to jolt the share price.” Amazon’s more subdued expectations for this year’s holiday shopping season, which runs from the U.S. Thanksgiving holiday in late November through New Year’s, was a particular surprise. It forecast that fourth-quarter sales will rise between 10 percent and 20 percent, or up to $72.5 billion, while analysts were expecting $73.9 billion, according to Refinitiv data. That would be Amazon’s lowest quarterly sales growth since at least the start of 2016. In the last four quarters, sales increased between 29 percent and 43 percent.
Packages go on an automated conveyor line to be scanned, weighed and labeled at the Amazon fulfillment center in Kent, Washington, U.S., October 24, 2018. REUTERS/Lindsey Wasson
Brian Olsavsky, Amazon’s chief financial officer, said no fundamentals had changed, just some holiday timing in India and accounting differences. “We’re expecting a strong holiday season, so there’s no message in our forward guidance against that,” he said on a conference call with media. “We have everything ready to roll.” The company moved the recording of $300 million in Prime subscription revenue from the fourth quarter to earlier periods in the year, he said. In addition, Amazon faces a tougher year-over-year comparison because the Whole Foods deal closed in the third quarter of 2017, and the different timing of the holiday Diwali affected sales patterns, he said. “Amazon saw a meaningful slowdown in their international division. They had been hitting on all cylinders so this is something investors weren’t ready for,” Chaim Siegel, analyst at Elazar Advisors, said. Amazon forecast fourth-quarter operating income between $2.1 billion and $3.6 billion, below the $3.87 billion expected by analysts, according to FactSet. Neil Saunders, managing director of GlobalData Retail, said the results reflected a shifting landscape with retailers holding their own against Amazon. “Others are now getting better at nibbling away at its dominance,” he said, citing Walmart (WMT.N), Target TFT.N and Macy’s (M.N). Despite slower sales growth, Amazon has steadily become more profitable. Third-quarter net income rose to $2.88 billion, or $5.75 per share, from $256 million, or 52 cents per share, a year earlier. Up to 53 percent of goods sold on Amazon now come from third-party merchants, the company said on Thursday, marking a steady shift away from traditional retail where Amazon is the seller of a product. That means the company is collecting less revenue but taking in a lucrative cut of others’ sales - all the more profitable when merchants pay Amazon to handle their shipping. Seller services grew 31 percent to $10.4 billion in the third quarter. “They’re indifferent if they sell us their own merchandise or third-party merchandise, so they shouldn’t be punished for the latter,” said Michael Pachter, an analyst at Wedbush Securities. More sellers are looking to Amazon to market their products, too - another highly profitable business. Amazon appeals to advertisers because individuals generally are using the site to shop, unlike users browsing Alphabet Inc’s (GOOGL.O) Google, the ads sales leader, to find general information or rival Facebook Inc (FB.O) to see updates from their friends. Amazon said revenue from the category and some other items grew 122 percent to $2.5 billion in the third quarter. Analysts were expecting $2.4 billion, according to Refinitiv data. Olsavsky, the CFO, also said the company is operating more efficiently, hiring less than in the past and adding less warehousing space. “We’ve really been able to cut back in a number of key areas,” Olsavsky told reporters, citing cost improvements for cloud unit Amazon Web Services as well. The world’s No.1 cloud business by revenue saw sales up 45.7 percent to $6.68 billion, narrowly edging past estimates of $6.67 billion.