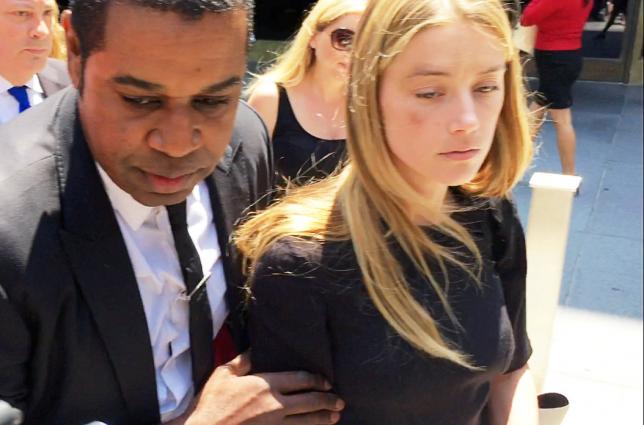 LOS ANGELES – Lawyers for actress Amber Heard filed a defamation lawsuit against comedian Doug Stanhope on Friday after he wrote an article accusing her of blackmailing and manipulating her estranged husband, actor Johnny Depp. The complaint was filed in Cochise County, Arizona, against Stanhope and 20 unnamed individuals associated with the comedian. The lawsuit demands a jury trial and says that Heard would donate all proceeds to a battered women's shelter in Arizona. Representatives for Stanhope and Depp did not immediately respond to requests for comment. The complaint is in response to a May 29 guest column by Stanhope published on entertainment trade outlet TheWrap.com and headlined "Johnny Depp Is Being Blackmailed by Amber Heard – Here’s How I Know." Stanhope, who said he was a friend of Depp's, wrote that Depp had told him that Heard was leaving him and "threatening to lie about him publicly in any and every possible duplicitous way if he didn't agree to her terms." "Blackmail is what I would imagine other people might put it, including the manner in which he is now being vilified," Stanhope wrote. Lawyers for Heard called Stanhope's comments, detailed in the complaint, "completely false and highly defamatory." The lawsuit is the latest step in the increasingly acrimonious split between Heard, 30, and Depp, 52, who had been married for 15 months. Heard filed for divorce from Depp in Los Angeles last month, citing irreconcilable differences, and obtained a temporary restraining order against the actor. She said in court papers that Depp had been abusive to her throughout their relationship, culminating in a May 21 argument during which he hurled a cell phone at her face and shattered objects in her apartment. The documents included photos of the actress with a bruised eye that she said she sustained in the incident. Heard later gave a statement to Los Angeles police in which she accused Depp of domestic violence. Depp, one of Hollywood's top stars and box office draws, is currently touring with his band Hollywood Vampires in Europe and is scheduled to perform in Bucharest, Romania, on Monday. The actor's 17-year-old daughter from a previous relationship, Lily-Rose Depp, supported her father on Instagram last week, posting a photo captioning her father as "the sweetest most loving person I know." –Reuters