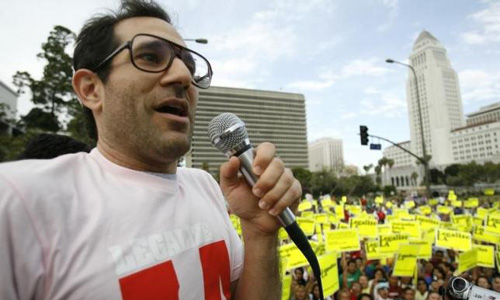 LOS ANGELES - American Apparel Inc's (APP.A) founder and former Chief Executive Officer Dov Charney is seeking $40 million in damages after he was fired from the post, Bloomberg reported on Thursday. Charney's claims include about $6 million in severance, $1.3 million in vacation-time pay, about $10 million for emotional distress and 13 million shares of the company, Bloomberg reported, citing a letter provided by Charney's lawyer, Keith Fink. Fink was not immediately available for comment. The company's board ousted Charney last year for allegedly misusing corporate funds and helping to spread nude photos of a former employee on the Internet. The U.S. Securities and Exchange Commission has ordered an investigation into matters arising from the review by the board committee of American Apparel that formalized Charney's firing in December 2014, the fashion retailer said in a filing on Wednesday. American Apparel learned of the formal order of investigation on Feb. 5, but it was not immediately clear whether the probe related to Charney's conduct or to the board's review of him, according to the filing. Charney, 45, started American Apparel's predecessor companies in 1989 and had been at the helm since 2007, when the company went public. Charney and American Apparel were not immediately available for a comment. American Apparel also reported Wednesday that in the fourth quarter of 2014 it lost about $28 million and its net sales fell about 9.2 percent. It also incurred $3.8 million in legal and consulting fees in the quarter related to its investigation into Charney. - REUTERS