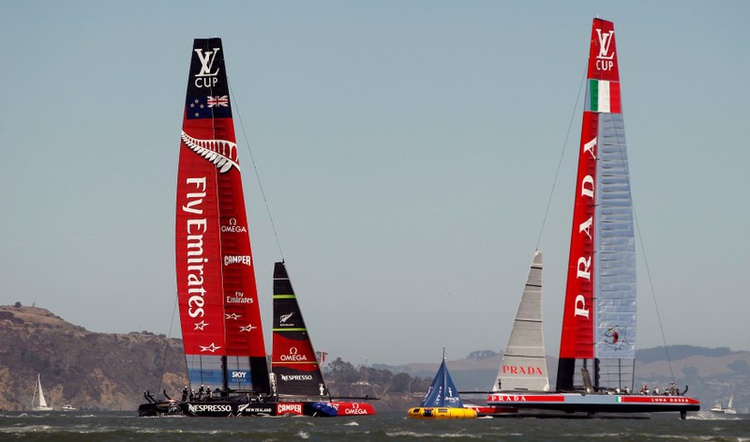 MONACO (Reuters) - Preparations by the teams competing for the 36th America’s Cup in 2021 are well underway, although they are charting different courses in designing their radical new foiling monohulls. While American Magic and INEOS Team UK have both shown off mini prototype versions of the futuristic 75 foot yachts which will do battle off the coast of Auckland in three years time, America’s Cup defender Emirates Team New Zealand has opted to use computer modelling and onshore testing to hone its design. “We are putting a lot of effort into the design and the boat’s looking really exciting. We don’t have a test boat in the water like a lot of the other teams, but we are trying to do it in other ways,” Emirates Team New Zealand skipper Peter Burling told Reuters at the launch of the Prada Cup in Monaco. The America’s Cup is usually won by the team which has designed and built the quickest boat, something New Zealand did when they beat Oracle Team USA in the last Cup in Bermuda. This dimension has attracted sponsors including planemaker Airbus, which is this time supporting American Magic. New Zealand not only came up with a revolutionary way of powering their catamaran’s hydraulics, using pedal power, but also split the roles of helmsman and “pilot”, who controlled the foiling craft’s flight and stability. Much of this advantage was attributed to the computer simulation and testing done before ENTZ’s boat even hit the water, although it has kept its methods under close wraps. “There’s a lot of design that goes on in these boats, we are fortunate that our testing is pretty good,” Burling said.

Meanwhile, Italy’s Luna Rossa Challenge, which is sponsored by Italian fashion house Prada and tyremaker Pirelli, began construction of its AC75 a few weeks ago and is focussed on other details, including developing the new “wing sail”, Max Sirena, its team director and skipper, told Reuters. “Everyone is looking to seeing these boats sailing in the water, and its going to happen soon,” Sirena said, adding that the speeds reached would be “huge”, giving sailors a combination of “excitement, stress and emotion”. While the other crews are trying to “fly” their prototypes and using the data to inform their design team’s plans, ETNZ’s Burling, who coolly steered the Kiwis to victory in 2017, said his sailors are getting lots of time on the water aboard other boats ahead of the launch of the new AC75 class in 2019. “We are going to be doing a lot of sailing in smaller boats,” said Burling, adding that he would be defending his Olympic 49er title with ETNZ crewmate Blair Tuke in 2020. For INEOS Team UK, set up by Britain’s Ben Ainslie, the experience of testing its “little boat” prototype for the AC75 on the waters of the Solent has been invaluable. “The AC75 is ... a completely new concept so it’s been important to get that style of boat out there and get the sailors learning about it,” INEOS Team UK Sailing Team Manager Jono Macbeth told Reuters. Macbeth, a New Zealander with three America’s Cup wins during his career, said the AC75s will be capable of greater speeds than the adrenaline-inducing catamarans of the 35th edition, which reached nearly 50 knots. “It’s amazing, it definitely has its challenges and it’s going to be a tough boat to sail. The best sailors will have to be on board to get it round the track in the fastest time. It’s a very exciting time to be in the America’s Cup,” he added.