Amid Kavanaugh fight, Trump says it is a 'scary time' for young men 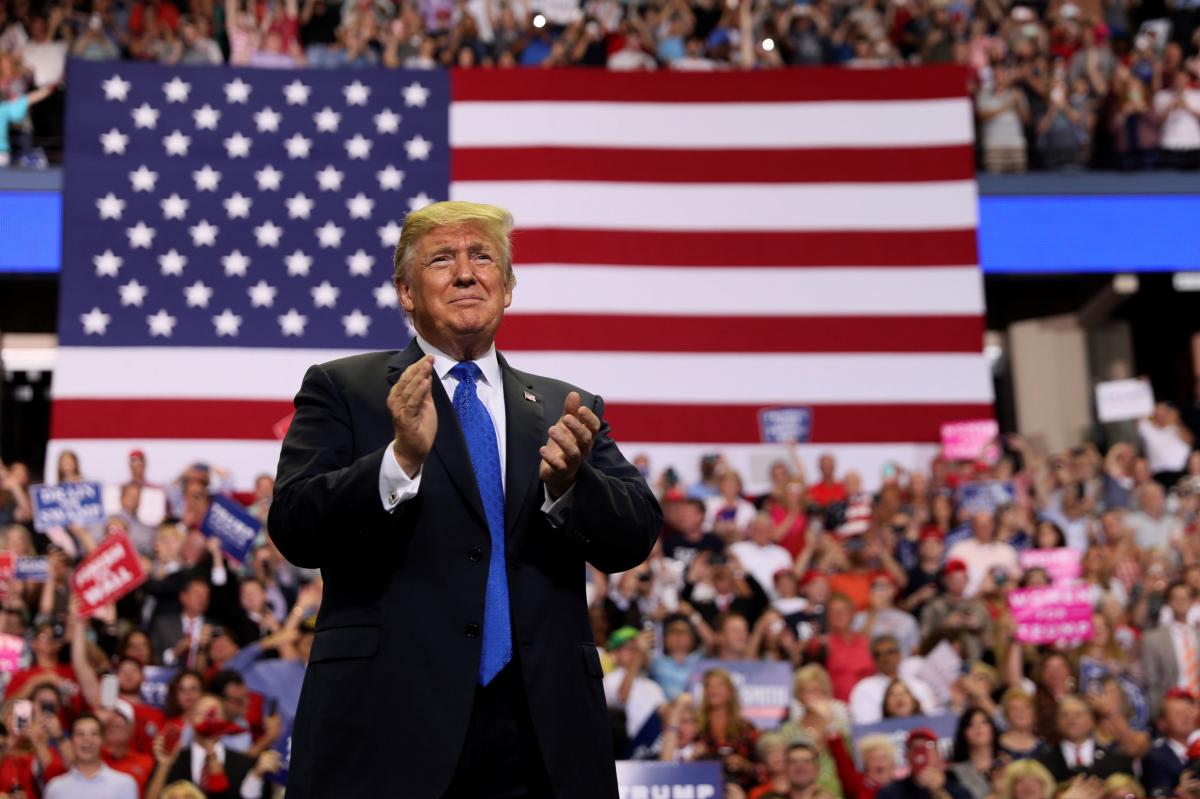 Amid Kavanaugh fight, Trump says it is a 'scary time' for young men

WASHINGTON (Reuters) - President Donald Trump said on Tuesday that allegations of sexual misconduct against his US Supreme Court nominee, Brett Kavanaugh, showed that “it’s a very scary time for young men in America” who now may be presumed guilty even when innocent.
Five days after an extraordinary Senate hearing watched by millions of people in which university professor Christine Blasey Ford detailed her sexual assault allegation against Kavanaugh, Trump raised the issue of false accusations against men. “My whole life, I’ve heard you’re innocent until proven guilty. But now, you’re guilty until proven innocent. That is a very, very difficult standard,” Trump said outside the White House. “Well, I say that it’s a very scary time for young men in America when you can be guilty of something that you may not be guilty of.” The fight over Kavanaugh’s nomination to a lifetime job on the top U.S. court comes against the backdrop of the #MeToo movement fighting sexual harassment and assault that has toppled a succession of powerful men. Under pressure from Democrats and some moderate fellow Republicans, Trump on Friday ordered an FBI investigation lasting up to a week into the allegations against his nominee. He told reporters on Tuesday he thought Kavanaugh would win Senate confirmation once the FBI finishes its investigation. Kavanaugh’s confirmation would consolidate conservative control of the Supreme Court, with disputes involving abortion rights, immigration, gay rights, voting rights and transgender troops possibly heading to the court soon. The fight over Kavanaugh’s nomination has been unusually emotional and has unfolded just weeks ahead of Nov. 6 elections in which Democrats are trying to seize control of Congress from Republicans. Some Republicans fear pushing ahead with Kavanaugh’s confirmation could alienate women voters, while Democrats are seeking to capitalize on the controversy. Trump, who was himself accused during the 2016 presidential race of sexual misconduct with numerous women, tried to link the allegations against Kavanaugh to what he said was a broader problem. “What’s happening here has much more to do than even the appointment of a Supreme Court justice. It really does. You could be somebody that was perfect your entire life, and somebody could accuse you of something. It doesn’t necessarily have to be a woman,” Trump said.
Ford testified that Kavanaugh sexually assaulted her at a party in 1982 when they were high school students in Maryland.
At a rally in Mississippi on Tuesday night, Trump mocked Ford for not having answers to some questions during her testimony. “What neighbourhood was it in? I don’t know. Where’s the house? I don’t know. Upstairs, downstairs, where was it? I don’t know. But I had one beer. That’s the only thing I remember,” Trump said in imitation of Ford’s testimony. “And a man’s life is in tatters,” he said.

In angry and defiant testimony before the Senate, Kavanaugh denied Ford’s accusation, as well as allegations by two other women of sexual misconduct in the 1980s. Senator Jeff Flake, a moderate Republican who could be pivotal in the confirmation vote, raised concerns about the judge’s “partisan” tone at the Judiciary Committee hearing. “I tell myself, ‘You give a little leeway because of what he’s been through.’ But on the other hand, we can’t have this on the court. We simply can’t,” Flake, who is retiring as a senator in January, said at an event in Washington. Flake voted to approve Kavanaugh in the committee’s vote on Friday that sent the nomination to the full Senate, but he also insisted the FBI investigate the sexual misconduct allegations. Flake has said Kavanaugh’s nomination would end if the FBI investigation found he had lied in his Senate testimony. Republicans control the Senate by a 51-49 margin. That means if all the Democrats vote against Kavanaugh, Trump could not afford to have more than one Republican oppose his nominee, with Vice President Mike Pence casting a tiebreaking vote. Senate Majority Leader Mitch McConnell said each senator would get a copy of the FBI’s report on its investigation.
“But here’s what we know ... one thing for sure. The Senate will vote on Judge Kavanaugh here, on this floor, this week,” McConnell told the chamber.
Senator Dianne Feinstein, the Judiciary Committee’s top Democrat, said a Friday vote would not give senators enough time to evaluate the FBI probe. Flake said the FBI had completed interviews with four people. A lawyer for Kavanaugh’s friend Mark Judge said the FBI had finished its interview with him. Ford identified Judge as a witness to the alleged assault. Judge has previously denied any memory of such an incident. Ford’s lawyers said on Tuesday she had offered her full cooperation with the FBI in its investigation but had received no reply. “It is inconceivable that the FBI could conduct a thorough investigation of Dr. Ford’s allegations without interviewing her, Judge Kavanaugh, or the witnesses we have identified in our letters to you,” the lawyers said in their letter to FBI Director Christopher Wray. Chuck Grassley, the Republican chair of the Senate Judiciary Committee, separately demanded in a letter to Ford’s lawyers that they provide a range of materials to determine whether her allegations are credible. They include notes from therapy sessions and video or audio recordings of a polygraph test she took. A person familiar with the matter said the FBI questioned Deborah Ramirez, who has said Kavanaugh exposed himself to her at a party when both were Yale University students. She was questioned for more than two hours on Sunday and provided the FBI with a list of over 20 possible witnesses, the person said. The FBI was also due to question Leland Keyser and PJ Smyth, two people who Ford said were at the gathering of teenagers where Kavanaugh allegedly assaulted her.