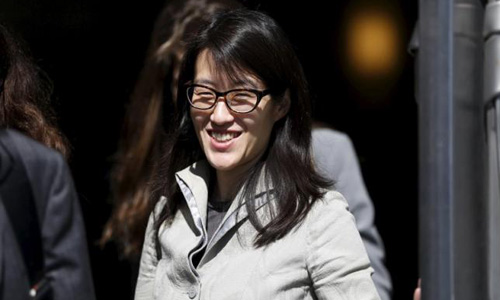 SAN FRANCISCO - For the past month, the name most associated with venture capital firm Kleiner Perkins Caufield & Byers is former partner Ellen Pao, who took the firm to trial for gender discrimination and retaliation. Now the company is searching for new names, at a more intense level than is typical in venture capital, leaders who will take over the firm in coming years as current partners retire. “You can imagine that over the next 18-24 months we’ll be adding people to the firm,” said Mike Abbott, 42, one of the newest Kleiner partners, and himself a contender to one day take over the mantle of the firm from its current de facto leader, 63-year-old John Doerr. Describing the effort as “a big focus,” Abbott said in a telephone interview with Reuters on Thursday that he is actively recruiting, along with Doerr and longtime partners, Ted Schlein and Juliet de Baubigny. The question around the next generation of leaders at Kleiner is taking on added significance because of Pao's lawsuit, which is highlighting gaffes by current and previous partners. Any fallout from the trial, where the jury began deliberations on Wednesday in a California courtroom after 4 -1/2 weeks of testimony, is being taken as a lesson in Silicon Valley. Once the dominant force in venture capital, backing Google and Amazon, Kleiner has delivered a more mixed record in the past several years. Its most recent flagship fund totaled $450 million, compared to $650 million three years earlier. The firm reorganized in 2013 and 2014, saying it wanted to be smaller and more agile. In the process, many younger partners left. Abbott said the Pao lawsuit had not had an impact on the recruiting drive. “I think it’s a pretty different environment,” at Kleiner, Abbott said, compared to the male-dominated one that Pao’s lawyers have described in court. Abbott joined the firm three years ago, after most of the events covered in the trial. Abbott declined to identify potential recruits, both men and women. Negotiations could “take a long period of time,” he said. To deepen its bench, Kleiner could poach from other venture firms. It could also hire founders or operators from fast-growing start-ups, perhaps those backed by Kleiner. It could also try to buy a smaller venture partnership. Talks between Kleiner and Social + Capital, a firm created by former Facebook executive Chamath Palihapitiya, fell through around the turn of the year, Fortune reported in January. The firm declined to comment on the talks. NEW BLOOD NEEDED Formerly vice president of engineering at Twitter, Abbott is known as the vanquisher of the "Fail Whale," Twitter's signal of its once frequent infrastructure-based outages. And as part of a special team, he also helped the U.S. government revamp www.HealthCare.gov, the online market for health insurance coverage that made a rocky start in late 2013. "I enjoy building things from scratch or fixing things," Abbott said. Privately, some venture-fund investors say Kleiner, which is emerging from years of backing “green” technology companies that largely failed to deliver the anticipated returns, could use some of that same build-and-repair touch. Partly that is because of the bad publicity around the trial, where Pao said she was discriminated and retaliated against after she ended a brief affair with another partner, amid a climate that was overall unfriendly to women. Kleiner denied the charges and testified 20 percent of its investment partners are women, far higher than the industry average. But partly, it is also about performance. “They’re not popping out Instagrams,” said one Kleiner investor, referring to the photo-sharing service that sold to Facebook for $1 billion three years ago, making hundreds of millions for its venture backers, Kleiner not among them. The investor declined to be identified to avoid offending the firm. Kleiner counts Nest, a thermostat company that sold to Google last year for $3.2 billion, among its recent successes. Investors hold high hopes for companies such as Airware, a drone business that Abbott backed last year. It could take years to see if Abbott's investments, including photo-sharing service Snapchat, deliver large returns. In the meantime, investors can consider the successful leadership transitions Kleiner has made in the past. Founding members Tom Perkins and Brook Byers handed the mantle to Doerr in the 1990s. The firm, already known for backing winners like biotechnology business Genentech and electronics manufacturer Flextronics, then doubled down on its winning streak, harnessing the rise of the Internet. That legacy is a big part of the appeal and pitch to potential partners, says Abbott when asked about the difficulty of recruiting given the Pao lawsuit. “No matter how much you spend on PR, you can’t buy a platform or brand like Kleiner Perkins,” Abbott says. - REUTERS