An opera 'Alice' in London, worthy of the book's 150th 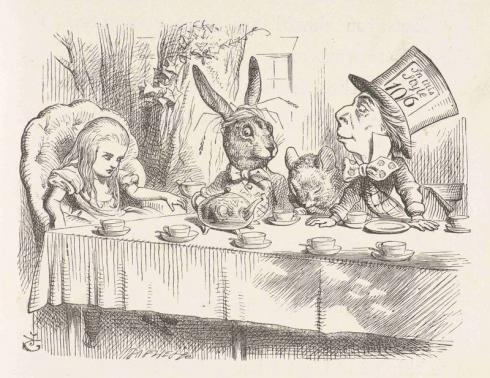 An opera 'Alice' in London, worthy of the book's 150th

LONDON - A century and a half after Lewis Carroll published "Alice in Wonderland", one of the greatest children's stories has an opera worthy of the book - even it's not really aimed at children. The Berlin-based South Korean-born composer Unsuk Chin, American librettist David Henry Hwang and British director Netia Jones brought an evening of adult Alice to the stage of the Barbican for one sold-out night this past weekend. They made extensive use of the famous Alice drawings from the 1970s by British caricaturist Ralph Steadman projected on a video screen The trimmed-down version of Chin's 2007 opera, which had its premiere in a full-blown staging that year in Munich, came to London after making a splash in Los Angeles the previous weekend. This first opera by Chin, a protege of the late Hungarian master of the macabre Gyorgy Ligeti, provides witty, inventive and indelible musical pictures of the characters and scenes. It begins with an almost inaudible bass rumble, but before long a massive battery of percussion infuses the music with at times foot-tapping oomph. Styles range from baroque to rap, with almost anything in between. A knockout is the Caterpillar who asks Alice "Who are you?" but does so wordlessly through an extended and magnificently evocative bass clarinet solo. The words are projected alongside an animated version of Steadman's caterpillar caricature on the video screen. A blonde, sharp-tongued Alice played by American coloratura soprano Rachele Gilmore in a blue pinafore with white smocking is onstage for the full two hours. It is a demanding role that not only requires drastic changes in height - in line with the plot - but also requires her to hit the highest notes in the soprano range. Alice's radical physical changes, which Carroll interpreters have said are meant to suggest her experiences as she enters womanhood, are evoked by having Alice stick her head out at the top of the video screen whenever she is a giantess. That allows her to peer down on the bloodthirsty Queen of Hearts, impeccably sung by American mezzo soprano Jane Henschel, and dismiss her and her entourage as "just a pack of cards". Other standouts included English countertenor Andrew Watts as the harried White Rabbit, with a rabbit's head on his pate and white fluff protruding from the back of his suit. Swedish soprano Marie Arnet, with cones of hair on either side of her head, did the honors as a femme-fatale Cheshire Cat. - Reuters