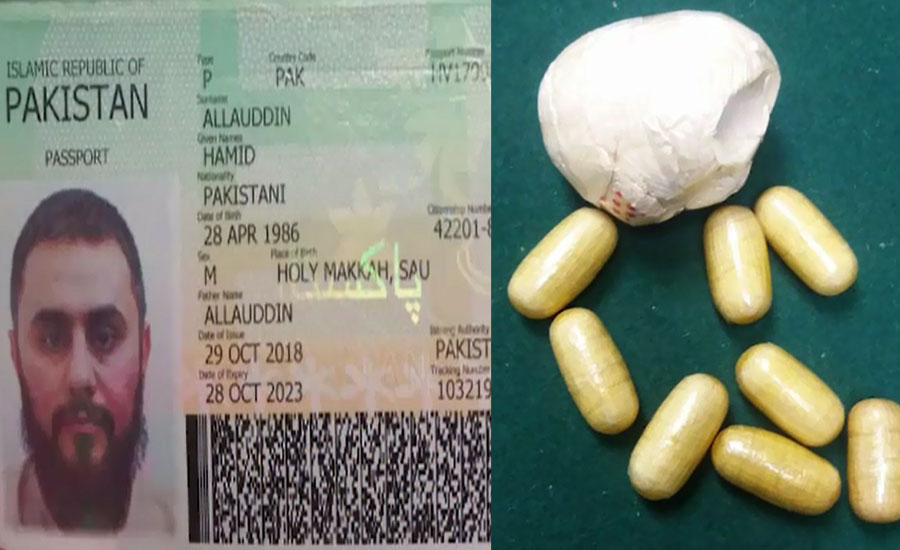 ISLAMABAD (92 News) – Anti-Narcotics Force (ANF) on Tuesday foiled a bid of smuggling drugs abroad from the Lahore airport. According to the reports, officials of the ANF recovered heroin-filled capsules, from a passenger on a Dubai-bound flight. The arrested man was identified as Hamid Alauddin. The drugs were concealed in the capsules, the passenger was carrying with him, the officials said. The passenger was going to Dubai via foreign aircraft when he was arrested from the Allama Iqbal International Airport.
On July 21, the son of former Pakistan Muslim League-N MPA Fozia Ayub Qureshi was arrested from his Bahawalpur residence after the Anti-Narcotics Force raided the property to find a huge quantity of chars on Sunday. According to the sources, officials took Tayyab Ayub into custody after seizing four maunds chars from his Kausar Colony residence. On his pointation, the Anti-Narcotics Force officials also arrested Adeel Aslam, who is the son of former candidate of Punjab Assembly seat Aslam Rind. The ANF team left Bahawalpur for Lahore. Officials are not ruling out the possibility of getting major revelations during interrogation with the arrested suspects. Earlier. ANF officials had arrested PML-N leader and ex-Punjab minister Rana Sanaullah for allegedly possessing 15 kilogram heroin in his vehicle. On July 17, a judicial magistrate had extended the 14-day judicial remand of six suspects including Rana Sanaullah, who is also the president of PML-N Punjab chapter. Earlier, the Anti-Narcotics Force (ANF) Lahore arrested PML-N leader Rana Sanaullah near Sukheke. Currently, the court extended judicial remand of the former law minister as of August 9 in a narcotics recovery case. Sanaullah was produced before the court in connection with his alleged involvement in a narcotics smuggling case. The PML-N leader requested the judge for provision of domestic meal in jail upon which the court directed Rana Sanaullah to file an application in this regard.