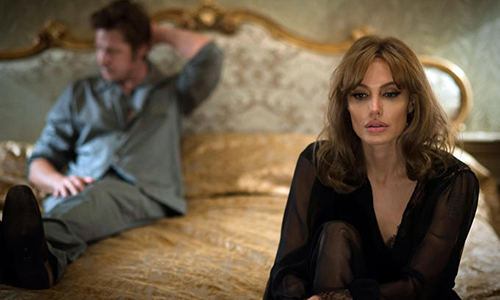 NEW YORK – Universal Pictures have released the first trailer for the Brad Pitt and Angelina Jolie Pitt film 'By the Sea' which is produced by Pitt and directed, produced and written by Jolie Pitt. Hollywood power couple Angelina Jolie Pitt and Brad Pitt, who reportedly got together on 'Mr and Mrs Smith' are back on screen together in the first trailer for relationship drama 'By the Sea'. The real-life couple play a husband and wife whose marriage is breaking down. They visit a resort by the sea and while interacting with fellow visitors start to solve the problems of their relationship. 'By the Sea' is directed and written by Angelina Jolie Pitt, whose previous film 'Unbroken' about Olympian and war hero Louis Zamperini received mixed reviews. According to a press release about the film, 'By the Sea' is "inspired by European cinema" and the production team includes the Palme D'Or winning 'The White Ribbon' cinematographer Christian Berger and 'The Lives of Others' editor Patricia Rommel. –Reuters